COMANESTI, ROMANIA (AFP) – Romanian teenager Cosmin sweats profusely under a gigantic bearskin costume as he prances to the exhilarating sound of drums, flutes and whistles to welcome the new year.

The parade Cosmin stars in has ancient roots and is increasingly a tourist attraction in Romania, especially for youngsters looking to reconnect with national traditions.

Performing in a costume made of real bearskin and weighing 40 kilogrammes is physically demanding, but Cosmin would not miss the dance for the world.

The 17-year-old student said with pride, swaying the animal’s head from side to side, “The skin I’m wearing belonged to my grandfather.”

The northeastern town of Comanesti puts on the colourful and noisy display to chase away evil spirits.

The centuries-old tradition is held across the country but is most fervently celebrated in the region that includes Comanesti, which has emerged as the hub for troupes of bearskin-clad dancers. 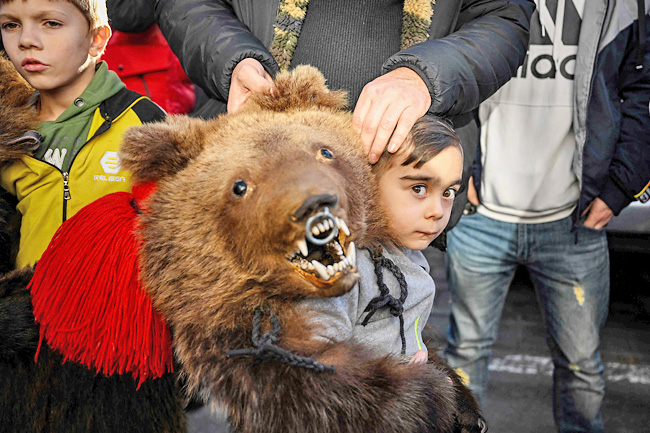 Preparations begin in autumn and the local council selects the hundreds of mostly young performers, with their ages starting from as young as eight and rarely exceeding 30.

The most expressive acts win prizes, while the imposing bearskin costumes come with the animal’s most fearsome features, including the paws, claws and mouth.

Small traditional mici sausages and kebabs are on the menu for spectators and dancers, and boards list the names of the participants’ home villages.

Romania is home to more than half of Europe’s brown bear population, an animal believed to embody strength and bravery but now protected as threatened by deforestation.

The dance has become a magnet for tourists and an important source of income in recent years.

Anthropologist Valer Simion Cosma believes the festival has undergone a “renaissance” since 2007 and Romania’s entry into the European Union.

He said, as many citizens choose to leave the country of 19 million people for brighter prospects abroad, the younger generation has grasped the event’s value as part of a “search for an identity”.

Cosma noted that the almost six million Romanians living abroad want to preserve local customs with family when they come back home.

The researcher added, that breaks with the recent trend whereby Romania’s “cultural interest was directed towards the outside” and folklore was “seen as outdated and confined to the older generations”.

The renewed enthusiasm for the bear dance, encouraged by television coverage, has given a new lease of life to the industry producing the costumes and attracted tourists in their thousands.

Cosma said, “The value of folklore no longer lies in the meaning it was once given, but in its role as a spectacle and its economic impact.”