ROMA, UNITED STATES (AFP) – Around midnight, Silvia hears the doorbell ring at her home in the small community of Roma, Texas, where she is a teacher.

When she answers the door, she finds a young girl, soaked and begging for help.

Silvia lives opposite a sandy path that sees hundreds of undocumented immigrants take their first steps into the United States (US) after crossing the Rio Grande from Mexico.

The 11,000 inhabitants of this Rio Grande Valley border town and these undocumented immigrants have lived alongside each other for decades.

There are mixed feelings among residents about the new arrivals: Compassion and empathy for those looking for a better future – just like many of their own families did years ago – but also worry and even fear about the growing number of people coming to their community in recent months.

Lately, there have sometimes been up to 500 people who cross the river in Roma per night, including families and children who have travelled alone. 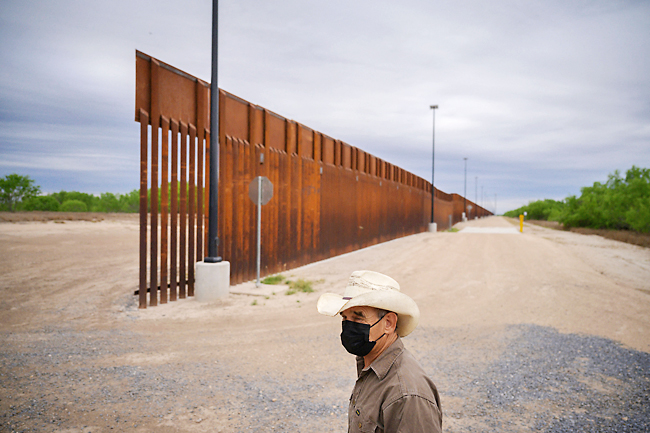 “What are we going to do with all these children?” Silvia wondered.

“Where are we going to put them? We also have people here who need help,” she said, standing in the door of her modest house, where she has installed security cameras.

The 58-year-old ultimately gave dry clothes to the girl that night – she had fallen out of a smuggler’s boat and nearly drowned – but Silvia didn’t want to lend the child her phone to make a call.

“There are too many,” she said. “I’m afraid. Something has to be done.”

Roma is a national historical site, founded 250 years ago and known for its bird watching opportunities.

The large majority of those who live there speak Spanish as well as English, are of Mexican descent, and work in the public sector or for oil pipelines. And Joe Biden won the 2020 presidential vote in Roma – just.

“We empathise with immigrants because we know their experiences. Their stories are our stories also,” Roma Mayor Jaime Escobar said.

“The only concern that I have as mayor is if it becomes an increased problem that we can’t control.”

Over the course of three nights, AFP journalists saw hundreds of immigrants cross the river in rowboats, most of them coming from Honduras, Guatemala and El Salvador – escaping hunger, violence and poverty.

Families and children turn themselves over to US Customs and Border Patrol (CBP) and are detained.

About 80 per cent of the lone children and teenagers already have at least some family in the US, and the Biden administration’s policy is to reunite the children with their relatives in the US – unlike under former president Donald Trump whose officials deported them.

Some families are able to claim asylum and are released from detention to await their hearings. Others are turned back.

But there are also adults who come alone and intend to escape detention entirely.

It’s no easy feat – there is a strong law enforcement presence in Roma and the surrounding area as Biden seeks to assure critics that the border is not wide open and that single undocumented adults will be deported.

There were nearly 100,000 undocumented immigrants arrested at the border in February, a return to numbers not seen since mid-2019, before the COVID-19 pandemic.

For founder of local newspaper El Tejano Dina Garcia Pena, “there isn’t anybody here who doesn’t understand the fight for a better life”.

“A lot of people came from Mexico. My dad was undocumented. We leave water outside in case of emergency, we never deny a phone to anyone,” she said. But “we are seeing really large groups of 400 people.”

“The government has to (do) something about these people, they are looking for a place to live here, but there’s too many coming from out there,” local school custodian Tony Sandoval said, dressed in jeans, a cowboy shirt and straw hat.

The 67-year-old said he sometimes gives food to the migrants who pass his house, but he is furious that his fence on Roma’s outskirts frequently gets broken down.

Sandoval pointed to an incomplete portion of the reddish-brown border wall that runs between nearby sorghum and cotton farms – a cornerstone Trump project – and said he would like to see it finished.

Biden, who promised to reverse many of Trump’s anti-immigration policies, halted work on the wall when he took office two months ago.

Pastor at Bethel Mission Outreach Center Luis Silva, who is also in favour of the wall, greets immigrants at the riverbank, brings them water and escorts them to CBP.

But in his pocket, he carries a 9mm Smith and Wesson gun.

“There has to be a way to stop this thing,” Silva said. “I almost was attacked in my house” by a migrant, he added.

“We are the Wild West pretty much around here. We just have to watch out for our people.”

But for Noel Benavides, who owns 200-year-old Texas boot and hat store JC Ramirez in Roma, the wall is “the most ridiculous thing you could think of” and “just a waste of money”.

Benavides had to sell the land he had along the river to the Trump administration for the wall construction.

His family has lived in the area for eight generations, going back to when Texas was part of Mexico and the Rio Grande did not demarcate an international border.