THESSALONIKI, GREECE (AP) – A teenager from Greece’s Roma community who was shot in the head during a police chase over an allegedly unpaid gas station bill has died, the hospital that was treating him and members of the Roma community said yesterday.

The 16-year-old boy had been hospitalised for over a week in the northern city of Thessaloniki after he was shot in the early hours of December 5 by a police officer on a motorcycle. Officers were chasing the teen after he allegedly filled up his pickup truck at a gas station and left without paying the EUR20 bill.

The shooting led to days of often violent protests in Thessaloniki, Athens and other parts of Greece by members of the Roma community, despite pleas by community officials and some members of the teenager’s family to maintain calm.

“Everyone here is crying. It is unjust for a child to leave like this,” said Antonis Tasios, secretary of the Roma community where the teenager lived, confirming his death. “We have great pain.”

The Roma community has denounced the shooting as having racist motives. Several Roma men were injured or fatally shot in recent years during confrontations with police while allegedly seeking to evade arrest for breaches of the law. Members of the Roma community in Greece have long faced discrimination, and many often live on the margins of society. 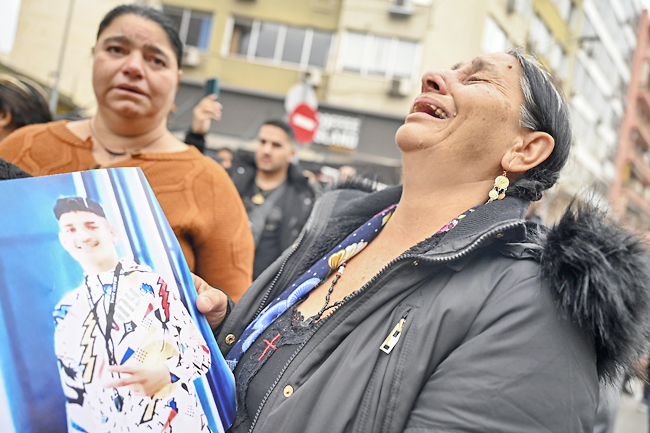 The hospital treating the boy, who has not been formally identified, said he was hospitalised in critical condition in the intensive care unit after undergoing emergency surgery, but that despite all efforts by medical staff, he died yesterday morning. The 34-year-old police officer accused of firing the shot has been suspended and under house arrest since Friday pending a court decision on whether to remand him into custody before trial on a felony count of attempted manslaughter with possible intent and a misdemeanour count of illegally firing his weapon.

Police have said the teenager tried to ram the police motorbikes involved in the chase with his pickup truck. The officer said during an initial court appearance last week that he had fired his weapon because he feared for the lives of his colleagues. Citizens’ Protection Minister Takis Theodorikakos, who has jurisdiction over Greek police, tweeted his “deep sorrow for the death of the 16-year-old boy” and extended his condolences to the teenager’s family.

“I repeat that this case is being investigated by the judicial system, the only one competent to assess the facts and judge responsibilities,” the minister wrote.

“Let us all respect that.”