PARIS (AFP) – Crickets and the birds that snack on them are not natural allies, but they do have a common enemy, according to a pair of studies published last Wednesday: roadside noise pollution.

Vehicle traffic makes it much harder for at least one species of bird to solve problems, and sharply compromises the ability of some crickets to mate, lab experiments showed.

“Hearing the noises of cars driving by is enough to inhibit cognitive performance in songbirds,” Christopher Templeton, a biologist at Pacific University in Oregon and senior author of a study in the scientific journal Proceedings of the Royal Society B, told AFP.

“This has significant implications for how well they can get along in life.”

There is mounting evidence that traffic noise – on the rise in most parts of the world – can have serious negative effects on animals, disrupting their ability to communicate, avoid predators, and attract mates. 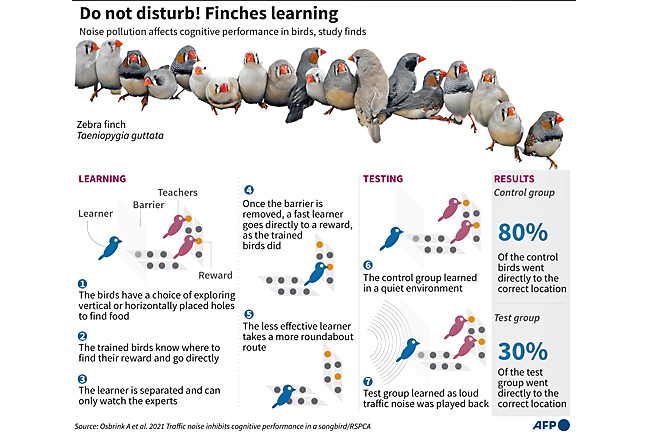 The new research is the first, according to the authors, to detail how noise pollution impairs cognitive ability.

In experiments, Templeton and his colleagues challenged zebra finches with a range of tasks in the absence of artificial noise, as well as with the mummer of road traffic in the background, simulating conditions in semi-rural areas with a significant human presence. Being exposed to traffic noise, for example, more than doubled the time it took for these intelligent birds to remember the location of hidden food, or to remove paper lids over tasty morsels.

“The impact of hearing traffic noise was enough to significantly reduce performance on tasks,” Templeton said.

Experiments testing the effect of noise on cognition in young children, he noted, had yielded similar results.

In a second study, published in the journal Behavioral Ecology, a trio of scientists showed that – for a common species of cricket – traffic noise interferes with their mating ritual, and thus with sexual selection and the process of evolution itself.

The mating protocol for the two-spotted cricket (aka Gryllus bimaculatus) begins with the male rubbing its wings – one sporting a file, the other a scrapper – together to produce its signature chirping song.

Discriminating females can judge the fitness of a potential mate by the quality of their song – nature’s way of ensuring that only the best genes get passed on.

In contrast to most mammals, it is the female that mounts the male she has judged most deserving of her favours.

In the experiments, the researchers surgically disabled the music-making ability of the males so as to be able to substitute recorded songs of either “low” or “high” quality. “These crickets have hard chitinous outer wings that have no pain receptors, so cutting their wings did not cause them any undue harm or suffering,” lead author Adam Bent, a researcher in zoology at the University of Cambridge, told AFP.

In the presence of the silenced males, females heard both low- and high-quality mating calls under three conditions: against a backdrop of white noise, road traffic, and no added noise whatsoever.

Females took more than twice as long to mount the males when there was either white or traffic noise, and had a lower success rate – about 70 rather than 90 per cent – in consumating the act.

“Mate choice decisions can have strong implications on the success and viability of offspring,” Bent said. “This could disrupt the evolution of this species.”

“But insects have been vastly underrepresented in this field,” Bent said.