ACANDI, COLOMBIA (AP) — It was 5am and in dozens of small tents around 500 migrants began showing signs of life, rising, packing their bags and preparing to cross the Darien Gap, the thick jungle teeming with snakes, bandits and treacherous rivers that separates Colombia from Panama.

Over a fire, Emile and Claude cooked some yucca and pasta to take on the six-day journey, along with 20 litres of drinking water for which they paid the steep price of USD20. The men declined to provide their last names because they had entered Colombia illegally and feared being fined.

Emile, 29, said he had left his home country of Haiti 13 years ago to work in the Dominican Republic. Then he lived in Chile for four years, and two months ago he decided to leave for the United States (US).

The pair picked up their belongings and started walking away from the grasslands that surround the Colombian town of Acandi toward the rainforest. Residents of Acandi served as guides, charging the migrants USD50 each to show them the way toward Panama.

As borders open around the world after months of pandemic-related lockdowns some illegal migration routes are also seeing an uptick in crossings. Muddy paths across the Darien jungle have long been used by smugglers to take migrants from South America to Central America as they make their way to the US. 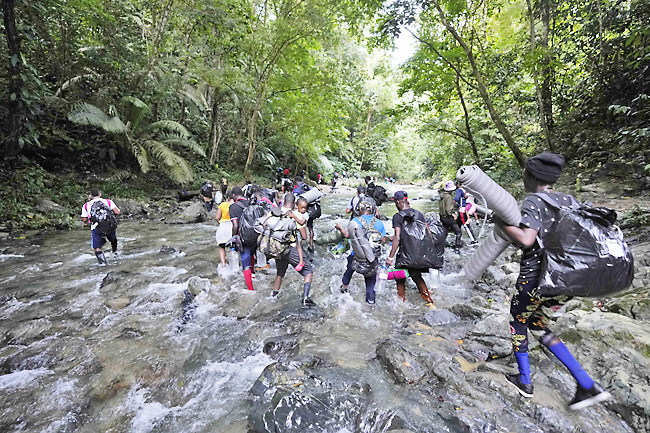 Panamanian immigration officials said the number of people crossing the Darien Gap has reached record levels, with 70,000 migrants making the dangerous trek so far this year and registering at shelters in Panama.

Most of those currently crossing the Darien are Haitians who were living in Brazil and Chile and were left with little work due to the pandemic. Visa requirements make it almost impossible for low-income migrants from Haiti to take flights to Panama, Mexico or the US.

So many make the dangerous trek across the jungle in the hopes of starting a new life in the US.

“The jungle is very tough, we just walk without a precise idea of where we’re headed,” said Davidson Lafleur, a 24-year-old Haitian.

Lafleur had lived in Chile for three years, and was travelling to the US with his wife and their 11-month old daughter.

In August, Colombia and Panama agreed to limit the number of migrants crossing the Darien each day in a bid to ease pressure on shelters on the Panamanian side of the jungle.

But this created bottlenecks and confusion on the Colombian side. Every day hundreds of migrants arrive in the town of Necocli on Colombia’s Caribbean coast, where they need to catch a boat that will take them across the Gulf of Uraba.

Necocli’s Mayor Jorge Tobon said 1,000 to 1,500 migrants are arriving in the town each day, but only 500 are allowed to leave on boats heading across the gulf and toward the Panamanian border due to the recent agreement between the countries.

Tobon said more than 14,000 migrants are currently stuck in the town, with boat tickets sold out until the end of this month.

Accommodation in hotels and local homes is scarce. Many migrants sleep in tents next to the beach, where they use seawater to bathe and cook.

Once migrants are able to sail out of Necocli their next stop is the Colombian town of Acandi. There the migrants are sprayed with an alcohol solution at the town’s ramshackle port by locals trying to stop the spread of COVID-19.

The trail into the jungle begins 10 kilometres away from the town’s centre across a green savannah dotted with farms.

While some walk, many pay USD20 to get to the start of the trail on a cart pulled by a horse. Others hop on motorcycle taxis that take them for USD35.

Ones Armonte, a 36-year-old migrant from the Dominican Republic, paid for the motorcycle ride. Within an hour he was at the edge of the rainforest where a seven-day trek across the jungle awaited him.

“We depend on God’s will now,” he said. “Nobody wants to face the risk of crossing this jungle, but I need to make money to send to my children.”

After spending a night at the start of the trail, Armonte and dozens of others began the trek through the jungle.

They descended a steep hill and waded across a river where the water reached waist level. The current was strong and the sound of the water drowned out the voices of migrants and guides.

As they headed into the rainforest many of the migrants became exhausted and started to leave some of their belongings behind to carry less weight.

Wedding portraits, jackets and jeans were strewn along the trail.

A woman carried a foam mat in her arms, and was told by guides to drop it because it would be of no use in the jungle. She persisted and carried it while balancing a bag on her head.

Trailing the group, a 50-year-old woman fainted after crossing a river. She suffered from asthma and obesity.

“Yesterday we had another lady with asthma, her inhalator emptied and we had to turn back,” said one of the local guides, who declined to give his name over fears of being prosecuted for human trafficking.

In the jungle, dangers are plenty. Some migrants try to keep snakes away by tying pieces of garlic to their ankles, or rubbing a disinfectant on their legs.

The greatest danger, however, are other humans. In the Darien, armed groups control trails that are also used to traffic drugs.

Once migrants cross into Panama they are often abandoned by Colombian guides, who do not want to risk being captured abroad for human trafficking. Bandits often target groups of migrants and steal their possessions.

According to Doctors Without Borders, which runs a health post in the village of Bajo Chiquito on the Panamanian side of the Darien, 96 women were assaulted by bandits in the months of May and July, while they tried to cross the jungle.

The illnesses most frequently reported by migrants who make it across the jungle are foot funguses, gastrointestinal problems and respiratory infections. Yet thousands continue to make the trek.

According to Panamanian officials more than 20,000 people crossed the Darien jungle on foot in August, accounting for almost a third of all crossings this year.

Children have reportedly died in the jungle, and some pregnant women have given birth. Migrants say they have seen skulls and cadavers along the routes that cross the Darien.

“Fear is always with us,” Lafleur said as he crossed a river. “But we have no choice but to keep on going.”