The Consumer Price Index (CPI) in March 2022 increased by 3.8 per cent year-on-year compared to March 2021, according to the Department of Economic Planning and Statistics’ (DEPS) report.

The rise was in line with the increase in non-food (3.9 per cent) and food and non-alcoholic beverages (3.4 per cent) prices.

The increase in the non-food component was driven by miscellaneous goods and services (18.1 per cent) and transport (six per cent).

The rise in non-food component was also contributed by water, electricity, gas and other fuels (2.1 per cent). 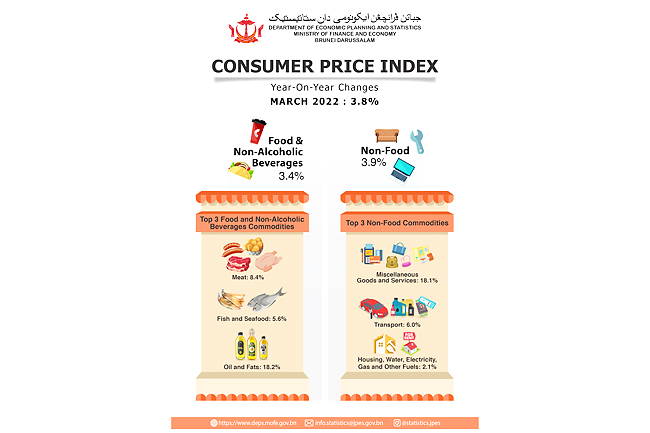 Rising prices of rental for housing as well as maintenance and repair of the dwelling drove up housing, water, electricity, gas and other fuel prices.

The increase in food and non-alcoholic beverages was due to the rise in prices of food such as cooking oil (27.5 per cent); chicken meat (8.5 per cent); and fresh fish (7.7 per cent).

The increase in cooking oil was mainly due to the rise in input prices of vegetable oil and palm oil. Meanwhile, the increase in the price of chicken meat was due to, among others, rising cost of chicken feed.