The number of migrants worldwide has been steadily increasing over the past decades, from 173 million in 2000 to 281 million in 2020. In May 2022, the Office of the United Nations High Commissioner for Refugees (UNHCR) reported over 100 million were forced to flee due to war and conflicts.

As the number continues to rise, many refugees and migrants face poorer health outcomes than the host populations, according to a recent World Health Organization (WHO) report.

The World Report on the Health of Refugees and Migrants is the first to offer a global review of health and migration. While health outcomes are influenced by a wide range of factors, refugees and migrants face additional determinants such as precarious legal status; discrimination; language and financial barriers; lack of information about health entitlements; low health literacy; and fear of detention and deportation.

Compared with workers in the host population, migrant workers are less likely to use health services and more likely to have had an occupational injury. It is common for migrants to have what are called 3D jobs – dirty, dangerous and demanding – and in high-risk sectors with a low pay and poor working conditions.

According to a study based in the WHO European region, the most commonly reported work-related health problems among refugee and migrant workers are related to musculoskeletal, respiratory and mental health. Numerous other studies from China, Hong Kong Special Administrative Region and the United States have also shown more occupational fatalities among migrant workers compared with the host populations. 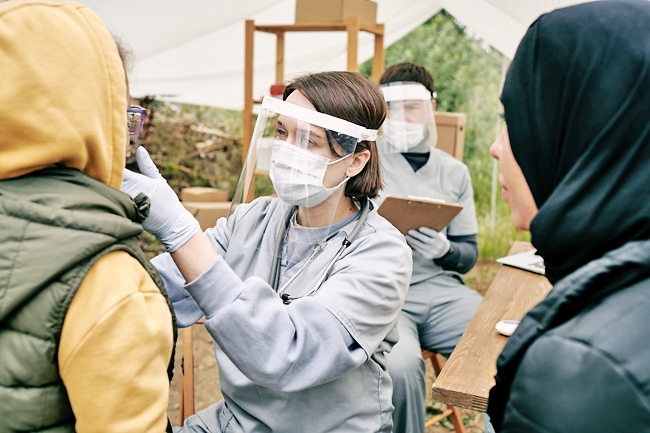 Male migrants tend to work in high-risk sectors and have higher rates of workplace injury. In a recent meta-analysis of over 12,000 migrants across 13 countries and territories of the WHO European region, almost half have had at least one occupational injury.

The same groups, as well as respondents without any schooling, were also less likely to seek healthcare for suspected COVID-19 symptoms. Financial constraints and fear of deportation were reported to be the main reasons for not seeking healthcare.

Refugees may also have limited access to medication, particularly in refugee camps. Common reasons include supply chain difficulties, costs, lack of adequate diagnostics and medication, and discrimination, which may lead to self-medication or usage of non-prescribed medicines/antibiotics.

Non-communicable diseases (NCDs), such as hypertension, diabetes and cardiovascular diseases are a significant health burden for all populations including refugees and migrants around the world. These are linked to longer residence in the host country, particularly middle and high income countries. Cancer is often diagnosed at later stages among refugees and migrants, while diabetes and hypertension are undiagnosed longer compared to the host population.

With regards to mental health, participants in the WHO Apart Together survey reported their mental health was significantly impacted by the pandemic and lockdowns. About half of respondents reported higher levels of symptoms of depression, worry, anxiety and loneliness, while 20 per cent reported an increased use of drugs and alcohol.

Two of the report’s key findings are the lack of comparable data across countries and over time on refugee and migrant health and the lack of disaggregation according to migratory status. The data should include information about health status, migratory status, and the socioeconomic and environmental determinants of health in which these operate to accurately assess the health status of refugees and migrants.