Riding into the past

A 70-strong convoy from the Darussalam Motorcycle Association (PEMODA) rode through the capital yesterday, passing by historical landmarks as part of a programme to learn more of the nation’s past.

The morning drizzle didn’t deter the riders from participating in the ‘Tracing Our History’ programme, organised by the Brunei History Centre in collaboration with Secretariat Office of the Malay Islamic Monarchy Supreme Council, PEMODA and the Museums Department.

The collaboration sought to enliven the ongoing Brunei December Festival 2022 while exposing more of the capital’s history to PEMODA members, said the association’s president Pengiran Haji Redzuan bin Pengiran Haji Ahmad. “This is also part of PEMODA project with the Brunei History Centre in conjunction with the Day of Action 2022,” he said.

The convoy was flagged off by Deputy Permanent Secretary (Culture) at the Ministry of Culture, Youth and Sports Dr Siti Norkhalbi binti Haji Wahsalfelah. 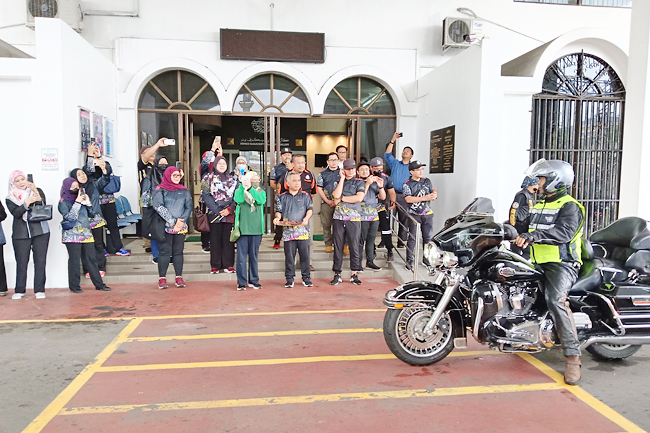 Principal of the Brunei History Centre Dr Haji Muhammad Hadi bin Muhammad Melayong briefed the riders on the historical sites that the convoy would pass by.

The route took the convoy to one of the oldest surviving buildings in Bandar Seri Begawan; Bubungan Dua Belas, the former official residence of British residents and high commissioners, which was built in 1906.

The former residence has been converted into a gallery showcasing the long-standing diplomatic relationship between the Sultanate and the United Kingdom.

The convoy also passed by the Time Piece Monument, a clock tower made to commemorate the visit of the first Yang-di Pertuan Agong of the Federation of Malaya, Tuanku Abdul Rahman, to Brunei in 1959, who also laid the foundation stone during that visit.

At the time, many used the clock tower as reference to measure the distance between the capital and other important places.