BANGKOK (AFP) – With cafes shuttered, universities empty and hook-up apps poleaxed by Internet blackouts, dating got much harder in post-coup Myanmar, but young people are still finding love – often in the heady rush of anti-junta protests.

Since the military seized power in February, ousting civilian leader Aung San Suu Kyi and ending a decade-long experiment with democracy, outrage on the streets has been met with a brutal crackdown on dissent.

Among protesters who came of age during Myanmar’s flirtation with parliamentary rule, ‘Taw Lan Yay Puu Sar’ – ‘Revolution Love’ in Burmese – is thriving alongside the anger and despair, making and breaking relationships.

“Meeting someone at a protest is very different and I think it is more exciting,” Zan, a 19-year-old student who met his girlfriend at an anti-junta demonstration in February, told AFP.

They got chatting after he offered her some oranges during a protest.

A few days later she contacted him on Facebook.

They started going to protests together, and romance blossomed against the backdrop of gunfire, burning tyres and chaos of the junta’s intensifying crackdown. 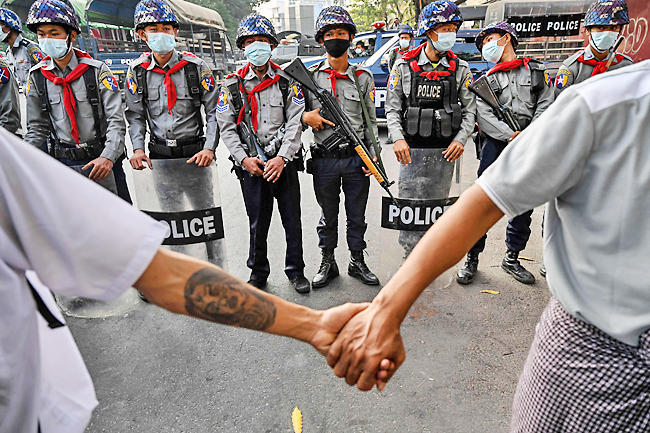 “It is hard because you never know what is going to happen,” said Zan, who only wanted to give his first name.

“We are always scared of when we will get shot. We could get arrested, or something could happen at any moment.”

The lovebirds had a close call in March when police suddenly broke through the barricade they were sheltering behind, sending them fleeing for a safehouse where they had to hide for several hours.

“So, when I must run, I will also make sure she gets to safety with me.”

Stories like his have spawned a ‘Revolution Love’ hashtag, with young protesters sharing stories, memes and viral posts of young love against the junta.

Pro-democracy posters and the three-fingered salute associated with anti-military rallies have appeared frequently in Tinder profiles after the generals restored access to the dating app last month.

Politics had always been a thorny issue for Kay and her partner – before the coup she had backed a pro-military party, while her partner was a supporter of Suu Kyi’s National League for Democracy.

But after the coup, the 23-year-old law student from Myanmar’s north was “on the people’s side”, she told AFP, going to protests with her partner.

They broke up in the middle of March – “without any reason”, she said, suspecting that politics may have had something to do with it.

Her suspicions were confirmed by the end of the month, when she heard her partner had met someone else at a protest which the police had broken up violently.

“I became very depressed… I was crying for two months straight,” she said.

“My partner decided to leave me for someone who grabbed them in a life and death situation during the revolution.”

Thel Nge, 20, met her now-husband Ko Kaung – both names are pseudonyms – when she responded to a Facebook call organising protests in their Yangon neighbourhood in mid-February, she told AFP.

They marched together in the streets under the blazing sun of the Yangon hot season, Ko Kaung looking out for her, making sure she had enough water, and that she got home safely.

“He is always good at taking care of me at those times and I got attached to him,” she said.

They fell in love and agreed they would get married “once the revolution ends”, Thel Nge said.

But as the crackdown got more brutal in Yangon, with security forces firing indiscriminately on protesters, she decided to return to her hometown in Myanmar’s far south.

Unwilling to be without her, Ko Kaung followed.

At that point “my siblings told me to marry him”, she said.

Back in Yangon, he returned to the frontlines and collecting donations for those on strike against the junta.

Thel Nge’s fears came true when he was arrested last month in Yangon and sent to the notorious Insein prison.

She has not seen him since, and said they can only communicate through writing letters.

She said the early days of their love, spent running and hiding from security forces before he was arrested, had given them “so many memories.”

“I am really sad because we are apart when we are a newly married couple,” she said.

“Every night, I pray for him.”