The retail and food & beverage (F&B) sector showed a year-on-year increase, according to statistics from the Department of Economic Planning and Statistics (DEPS)

The Retail Sales Index (RSI) showed a year-on-year increase of 11.9 per cent with an estimated retail sales value of BND454.4 million, according to DEPS. Meanwhile, the Food & Beverages Services Index (F&BSI), increased by 11.6 per cent compared to first quarter of 2020 with an estimated sales revenue of BND94.7 million.

Retail activities have shown an increase in sales driven mainly by the sales of watches and jewellery which increased by 62.2 per cent, followed by textiles, wearing apparel and footwear by 52 per cent; hardware, paints and glass in specialised stores (24.7 per cent); electrical household appliances and lighting equipment in specialised stores (22.6 per cent); and sales in department stores (12.6 per cent). In the F&B sector, the increase was attributed to sales revenue of beverage serving activities (35.1 per cent), followed by restaurants (12.5 per cent) and fast-food outlets (11.9 per cent).

The increase in sales of retail and F&B services was in line with the increase in domestic demand for certain goods and services due to travel restrictions abroad, said DEPS.

As compared to the fourth quarter 2020, the RSI in first quarter of 2021 has recorded a decline of 0.3 per cent mainly due to decrease in sales of computer and telecommunication equipment by 21.0 per cent, followed by sales of recreational goods by 10.7 per cent; furniture and household equipment (8.7 per cent); electrical household appliances and lighting equipment in specialised stores (eight per cent); and supermarket (2.6 per cent). 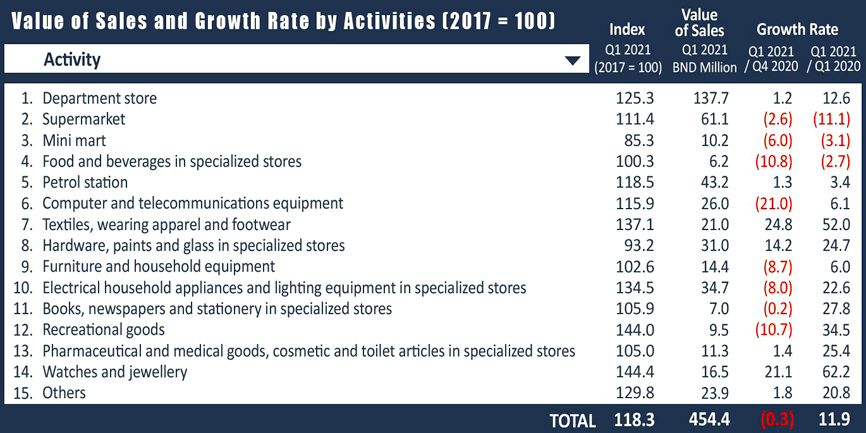