THE WASHINGTON POST – Q: I had painters in my house a few weeks ago and just noticed paint left on the sideboard in my dining room.

This is beautiful cherry furniture and is part of a custom set made for me by John Landis. How do I get it off without damaging the furniture?

A: Because you know who made your piece, a quick phone call was all it took to identify the type of finish: a Sherwin-Williams cataly-sed varnish.

Landis, who designs all the pieces his company makes but now has a crew that works on the fabrication and finishing, said he also adds paste wax as extra protection over the varnish on surfaces that will get a lot of wear, such as the top and surrounding edge on your sideboard.

Paint doesn’t stick well to catalysed varnish and especially not to wax, so there’s a good chance you might be able to scrape the paint off with a fingernail, he said. 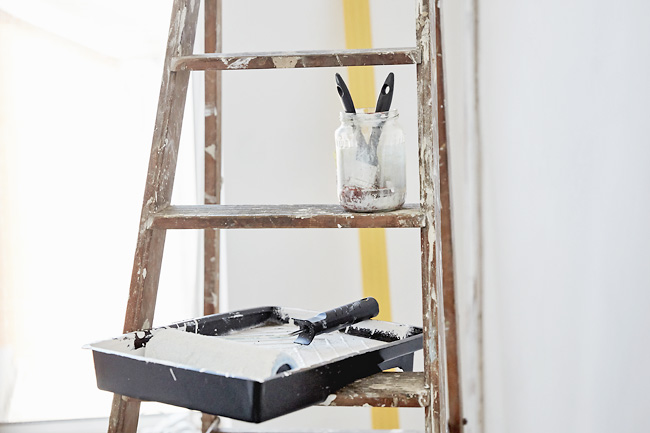 That would be especially likely had you noticed the paint earlier. Water-based paint, which accounts for most paint used these days, dries within a few hours, but it takes several weeks to cure and become tenacious enough to withstand being washed or scrubbed.

Christopher Brazie, whose LinkedIn profile identifies him as “Technical Services Specialist” for the Industrial Wood Coatings Division at Sherwin-Williams, also said scraping off the paint with a fingernail is the best thing to try first.

There’s no risk of damaging the finish or altering its sheen, or of smearing paint residue across the surface, which could happen if you softened the drip with solvent.

But because the paint is probably cured by now, it might not be able to be scraped off.

Brazie said that, when he’s asked about removing cured paint spatters from clear wood finishes, one of his first questions is whether the spatters are overspray – a bunch of tiny spots that landed when paint was being sprayed – or blobs of paint that dripped or were smeared from a brush. Spatters dry quickly, because they’re so small, he said.

The best way to remove them is to buff them with a wool pad, like what’s use to shine vehicles. Mounting the pad to a drill or buffer works best, because the speed knocks off the paint, but it’s also possible to hold it and buff it yourself, he said.Drips and smears from a brush take longer to dry, which means they are easier to scrape or wipe off at first.

But if drips and smears cure, you might need to dab on a solvent to soften the paint, so you can scrape or wipe it away without damaging the finish.

Luckily, using a solvent is probably less risky with conversion varnish than with other finishes.