Regular vs enamelled cast iron: How they compare for cooking and cleaning

THE WASHINGTON POST – This article begins with a reader question: What’s the difference between traditional and enamelled cast-iron cookware?

The good news for those tight on money or kitchen space is that most things that can be done in an enamelled pot or pan can be done in traditional, well-seasoned cast iron, with a few adjustments. A lot of the major differences come down to caring for the pieces, though there are some things to keep in mind while cooking, too. Here’s a rundown.

If you’re thinking about beefing up your cookware collection and money is a consideration, traditional cast iron is almost without exception cheaper than enamelled pieces, sometimes several times less expensive, depending on size and brand. When treated properly, both types of cast iron can last a lifetime, and then some. Whether you spend a little or a lot, consider it a long-term investment.

Home cooks fear and love the seasoning on traditional cast iron. Seasoning is what happens when fats are heated to a certain point that causes them to polymerise, or reorganise into something resembling a plastic coating, and bond to the metal. While many pans come pre-seasoned, a little regular maintenance (oiling after cooking) and frequent cooking will help build up the patina. If the seasoning is damaged, more intensive care – a couple of rounds of oil application in the oven or on the stovetop – may be required. Eventually you’ll get a naturally nonstick surface that rivals manufactured nonstick coatings. While enamel is useful in that it eliminates the pitted surface of cast iron where food can more readily get trapped and stick, it is not inherently nonstick and does not build up a seasoning. So each time you cook, you’ll need a sufficient amount of fat to avoid stuck-on messes. 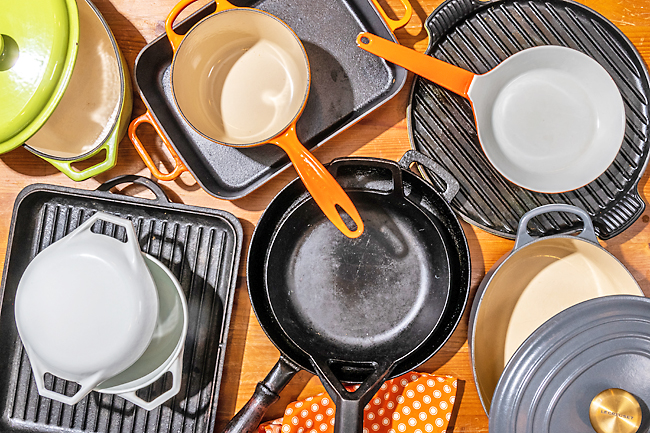 Enamel is less conductive than cast iron. That will change the rate at which the exterior of the pan – in which the cast iron is sandwiched between two coats of enamel – heats, according to David Green, an associate professor of materials science, chemical and mechanical engineering at the University of Virginia’s School of Engineering & Applied Science. Compared to traditional cast iron, an enameled pan will heat up at a slightly slower pace, he said.

That being said, enamel can help with a more even distribution of heat, said Liheng Cai, Green’s collaborator on a science of cooking class and an assistant professor of materials science, chemical and biomedical engineering. But that redistribution of heat is actually correcting the uneven nature of the burner rather than hotspots generated by the cast iron itself.

Being aware of the different heating properties is just half the battle. That “material mismatch”, as Green calls it, can wreak havoc on the pan itself if not handled properly. On the direct heat of a burner, the metal will heat (and expand) faster than the enamel, Cai said, potentially creating stress on the enamel and resulting in cracking.

That’s more likely in cases when the pan experiences thermal shock, or a rapid change in temperature – one reason an enamelled pan should not be heated empty on a burner. The same rationale applies to why you shouldn’t hit a hot enamelled pan with cold water, when the metal can contract faster than the enamel.

While regular cast iron is not as likely to crack, it’s generally good practice to not plunge that type of hot pan in cold water, either. Rarely does thermal shock cause a preheating cast-iron skillet to crack, so unless you know you’re dealing with a very unreliable burner, you can and should preheat it on the stovetop empty. That prevents the fat from breaking down or burning and ensures the food begins to crisp and brown as soon as it hits
the surface.

USE WITH CERTAIN INGREDIENTS

Regular cast iron is reactive, meaning acidic ingredients (vinegar, tomatoes, etc) can interact with the metal, imparting off flavours or colour to the food. Reactions are less likely with well-seasoned pans, especially for dishes with brief cooking times, but it’s something to keep in mind. Enamel is minimally reactive and acceptable for acidic foods.

No, I’m not just talking about the exterior enamel colours that make many people swoon. Many enamelled pieces have a pale, cream-coloured interior, making it particularly easy to monitor the colour of the flavourful fond (cooked-on juices) at the bottom of the pan or just check for burning. While it’s not impossible to do in a traditional cast-iron pan – or black enamelled pan – you just need to be more attentive to make sure you don’t let things go too far. Something like caramel in a dark-coloured pan can be trickier to judge by sight, as well, but in that case, an instant-read thermometer can be your friend.

WHICH TO PICK WHEN

You may have pans of both types already in your kitchen, so which you pick may depend on what you’re making. No-knead bread will work fine in Dutch ovens that are enamelled or not. Searing a steak? Cai said you may be better-served with regular cast iron since it can be heated to a higher temperature, giving you a quickly crisped exterior and less well-done interior. Also think about whether you’re cooking in a dry versus wet environment, Green said. In something like a stew or braise, the more even heat of an enamelled pan can be especially beneficial for consistent cooking throughout the dish.

If you don’t happen to have the pan called for in a recipe, all hope is not lost. Just keep in mind the points from above and adjust accordingly. Maybe you add a bit more fat going from a traditional seasoned to enameled cast iron. Perhaps you reduce the cook time going from enamelled to traditional cast iron. Pay attention to the food and tweak as necessary.

Soap and water are often all you need for both types of pans. And, no, they won’t remove the seasoning on your regular cast iron. Beware of more abrasive alternatives, though. A nylon scrubber or non-scratch sponge is fine, ditto chain-mail tools designed for the job, but scouring pads and cleaners such as Bar Keepers Friend can indeed damage seasoning. Kosher salt is coarse enough to help scrub stuck-on food without harming seasoning.

Bar Keepers Friend and Bon Ami, however, are great for enamelled cookware. Scouring pads or other coarse tools can scratch enamel. It’s best to dry both types by hand after washing – to prevent rust in the case of regular cast iron and to prevent an enamelled pan from being chipped, scratched or knocked over while sitting out to air-dry.