THE WASINGTON POST – Carry On: Reflections for a New Generation is a small, powerful and deeply observed book of ruminations written by John Lewis, the civil rights activist turned congressman who died last year at the height of the national political and racial turmoil unleashed in the wake of George Floyd’s murder.

At 80, Lewis had long crossed over into the category of living legend. Humble, kind, authentic and passionately committed to social justice, the farm boy born near Troy, Alabama, in 1940, who preached to chickens as a child, came a long way from his modest beginnings.

A letter written to Martin Luther King Jr while Lewis was in high school began a friendship that would change both men’s lives.

Lewis joined the civil rights struggle as a Freedom Rider and endured a brutal beating outside a bus station in Anniston, Alabama, on May 14, 1961.

His courage, tenacity and humility became hallmarks. As chairman of the Student Nonviolent Coordinating Committee, Lewis was the youngest keynote speaker at the August 28, 1963, March on Washington. Carry On is at its best when Lewis casually discusses the intricacies behind this history, including parts of his speech that were censored by concerned allies who thought his words were too incendiary.

Portions of Lewis’ address vowing to nonviolently march through the South like General William Sherman (who burned Atlanta during the Civil War) were dispatched. “I believed in nonviolence, and I didn’t need to use that imagery,” he conceded. 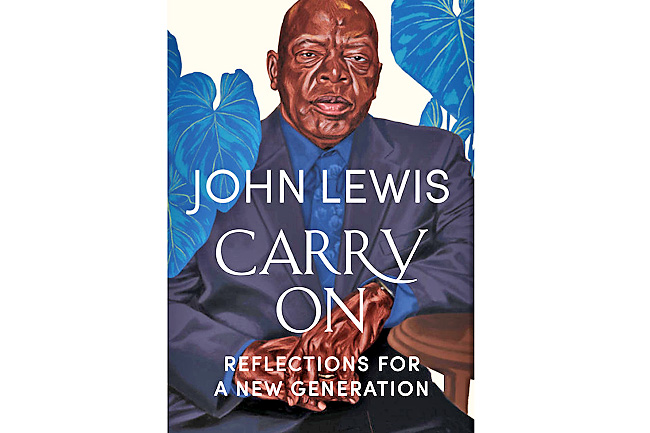 Black Lives Matter demonstrations in 2020; the police killings of Floyd, Breonna Taylor and other Black Americans; and the national thirst for a new beginning serve as through-lines for Lewis’ reflections on activism, spirituality, courage, politics and love. Gravely ill with the cancer that would take his life, Lewis remained a hopeful optimist, steadfast in lessons he imbibed at the feet of King and through the mentoring he received from countless Black women and men in the movement.

Lessons about speaking truth to power, no matter the cost, translate into what Lewis famously characterised as “good trouble.” Good trouble is the kind of activism that inspires young people to risk their education, freedom, even their lives in service of a cause greater than themselves. In the 21st Century the venerable Lewis – by now a totem whose endorsement and political support were sought after by the likes of Barack Obama and Hillary Clinton – renewed his sense of youthful activism.

His participation in a 2016 congressional sit-in to support gun-control legislation captured global headlines. Lewis’ very presence was a reminder of both the distance travelled since the Jim Crow regime placed a stranglehold on American democracy and the journey that remained in the age of Black Lives Matter.

Lewis retained his intellectual curiosity as he aged. Rather than resisting new movements for intersectional justice, he embraced them as exemplars and amplifiers of the “Beloved Community” that King had called the nation to reach toward. He identified with BLM demonstrators whom some critics derided as disgracing the legacy of the civil rights movement. Lewis, whose skull bore the scars of police violence, embraced contemporary racial-justice demonstrators as part of a long, unbroken line of “good trouble” required to stir a restless nation’s soul.Lewis’ ability to forgive those who physically assaulted him in the 1960s – and in so doing betrayed American democracy – is both awe inspiring and complicates that movement’s legacy in important ways.

For Lewis’ forgiveness was not just a personal choice; it was a political act, one that had to be matched with policy imperatives that guaranteed justice, as he observes in an essay called On Forgiveness. His hope, he writes, is that “forgiveness becomes a greater part of our national character”.

Perhaps the most remarkable part of Carry On is the way Lewis deftly converges the emotional with the intellectual, the personal with the political, freedom dreams with pragmatic calls for major policy innovation. In an essay called On Love he reminds us: “Love was the engine of the civil rights movement.”

It is not often that iconic figures from the past turn out to be better than advertised, but Lewis might be one of the rare exceptions.

Few lives that spanned evolutions in American society from 1940 to 2020 offer such exceedingly important lessons about the depth and breadth of the nation’s capacity for violence and transformation.

Lewis continued to work toward building the Beloved Community long after King’s assassination and through the conservative revolution of the Reagan era.

He lived long enough to see the election of a Black president, as well as the reversal of struggles for Black dignity and citizenship (most notably the erosion of the Voting Rights Act) thought to have long been won. He found a renewed spirit of activism in the age of Trump and became a north star for multiple generations of grass-roots activists who found hope in his story.

Carry On represents a final literary gift to a new generation of activists who have taken the responsibility – one that Lewis never considered a burden – to move America closer to the Beloved Community.

Lewis’ political example remains as relevant now as it did in his own time, perhaps more so since – with intersecting crises that touch on the environment, immigration, voting rights and the future of American democracy – we have reached an existential crossroads in the wake of last year’s political and racial reckoning.

As he did for his entire life, Lewis, through his words in this volume after his death, offers us sustenance, faith and hope for the battles that lie ahead.