RAMALLAH (XINHUA) – Groups of Palestinian women from the West Bank city of Hebron gather every day to produce various kinds of grape products.

The women are involved in a two-month seasonal project launched by the non-governmental Dora Cooperative Association for Agricultural Industrial that kicked off in August and will last till late September.

“Every year, we provide temporary job opportunities to at least 50 women; most of them are suffering from poverty and cannot keep their families afloat,” Huda Shadeed, head of the Palestinian institution, told Xinhua.

Aged from 25 to 65, the women can produce at least two tonnes of Palestinian traditional grape molasses, 1.5 tonnes of grape malban, one tonne of grape jam, half a tonne of raisins as well as other products.

Grapes make up some 12 per cent of the total agricultural production in the Palestinian territories, and it ranks the second place, after olives, in terms of quantities of production.

According to the Palestinian Central Bureau of Statistics (PCBS), the land planted with vineyards is estimated at more than 80,000 dunams (8,000 hectares), including 45,000 dunams in the Hebron Governorate and 15,000 in the Bethlehem Governorate. 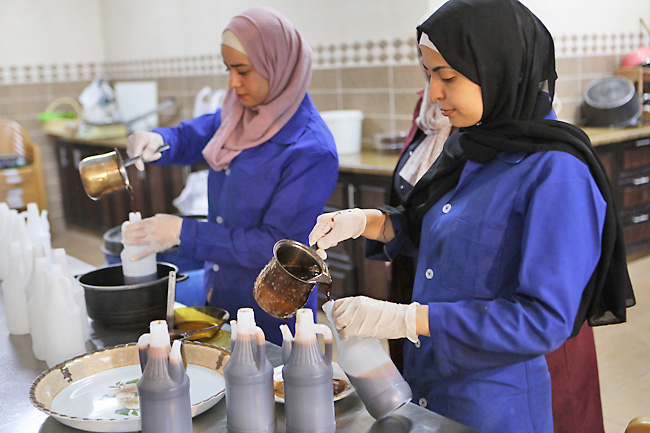 The annual production of grapes is estimated at 80,000 tonnes in the West Bank, including 52,000 tonnes in Hebron, the PCBS said in a report issued in late 2020.

“Hebron is famous for growing grapes, as it produces more than 15 varieties of grapes, most of which are characterised by a high sugar content, which allows us to produce many grape products and market them locally and internationally,” Shadeed said, as she followed up the women while they were cooking grape molasses.

Ebtisam Abu Arqoub, a Palestinian woman from Hebron, is one of the workers benefitted from the project, and she expressed her happiness over her participation in the initiative.

“Palestinians have been suffering from poverty for years. This is why, women have decided to take matters into their own hands and help their husbands earn money,” the woman said.

She explained that the traditional industries contribute to providing job opportunities for women, especially the uneducated ones.

“We inherited the making of grape molasses from our ancestors, and we have known this business even before honey production,” the woman said.

“Firstly, we take many types of grapes such as Beiruti, Salti, Shami and others, which are suitable for making molasses. Secondly, we wash them to remove the dust and then we unravel the grape clusters and put them in stone bowels where they are squeezed,” she said.

“Then, we take the juice and put it in canvas or hanging bags, which contain a special kind of white soil called al-Hur to purify the juice and remove impurities and acidity from it and leave it for a full day,” the woman explained.

Later the juice gets placed in pots over firewood stoves where it boils until the juice condenses and becomes sticky like honey.

After cooling, the syrup becomes ready to be packed in special glass jars that should be well-sealed until use.

Once the women finished their production process, the marketing department of their institution distributes the produce by either selling it to supermarkets or local markets. Sometimes, the institution exports the traditional Palestinian grape molasses through marketing them via social media platforms like Facebook and Instagram.

The thick black-sweet syrup is perceived by the Palestinians as being extremely healthy.

It is also believed to be able to help fight many illnesses due to its saturation in natural elements such as iron and potassium.

Hamada Jaradat, a 35-year-old man from Ramallah City, told Xinhua that every year he has been waiting for this season to buy grape molasses and other grape products.

“It gives us energy and warmth during the winter season,” the father of two told Xinhua, adding that the Hebron grape is the most famous in the Palestinian territories as they are distinguished by natural taste and zero preservative.