MADRID (AFP) – Vinicius Junior scored for the fifth game running as Real Madrid came from behind to beat Real Mallorca 4-1 in La Liga on Sunday and extend their perfect start to the season.

Mallorca grabbed a surprise lead through Vedat Muriqi on 34 minutes but Federico Valverde levelled for the hosts in first-half stoppage time after a brilliant solo run.

Vinicius put Real ahead with 18 minutes to play before late goals from Rodrygo and Antonio Rudiger rounded out a fifth successive league win as Carlo Ancelotti’s side moved back above Barcelona at the top.

“Vini is a special player, for the way he plays and for his character,” said Ancelotti. “He has extraordinary quality.

“The match was very difficult for several reasons. There was the heat, the fact we conceded from a set-piece… All that was a bit predictable, but we finally managed to turn things around and win the game.” 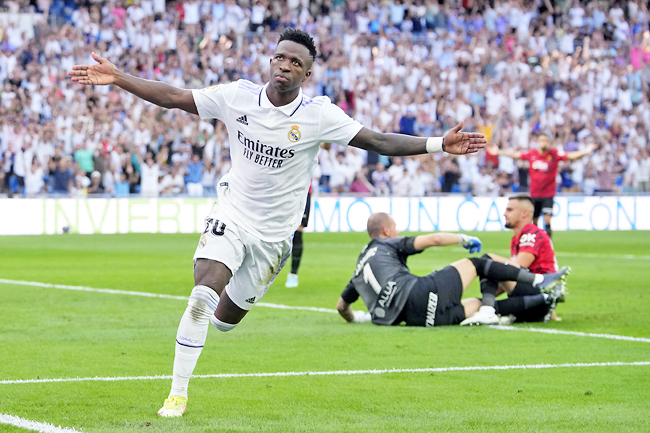 Madrid were without injured forward Karim Benzema, the favourite for next month’s Ballon d’Or, sidelined by a thigh injury sustained in the midweek Champions League win over Celtic.

“The team was able to overcome the absence of Karim. It’s an important confidence boost,” said Ancelotti. “(But) we hope to get him back as soon as possible.”

Madrid fell behind when Muriqi headed in a free-kick at the far post.

Valverde swung the momentum back in Madrid’s favour though, running from deep inside his own half and firing into the top corner from just outside the area.

Rodrygo shrugged off three defenders to set up Vinicius to make it 2-1, and the former struck a minute from time after again weaving through the defence before producing another excellent finish.

Rudiger volleyed in from Toni Kroos’ free-kick in injury time for his first Madrid goal since joining from Chelsea on a free transfer in the close season.

The victory left Real on 15 points with five wins from five matches, two ahead of Barcelona, who dispatched Cadiz 4-0 on Saturday.

Rodri scored the only goal as Real Betis defeated Villarreal 1-0 to climb to third, with Unai Emery’s side conceding for the first time this season.

Athletic Bilbao are up to fifth following a 4-1 victory at second-bottom Elche, while Getafe earned their first win after beating Real Sociedad 2-1.