Reach for the stars

DAKAR (AFP) – Marietou Thiam’s slender figure twists and twirls, suspended in mid-air by a hoop, under the spellbound gaze of onlookers at Dakar’s first-ever circus festival.

Thiam, 29, is the artistic director – and one of only two women members – of Sencirk, Senegal’s premier circus troupe, which organised the festival.

She moved to Dakar to study English but at the age of 21 left that life behind to join the circus.

“I performed in more and more shows and a moment came where I had to choose, because I couldn’t continue to do both,” she told AFP.

“It (the circus) is what I loved most, because it brought me close to the kids… I said, ‘I’ve found my career’.” 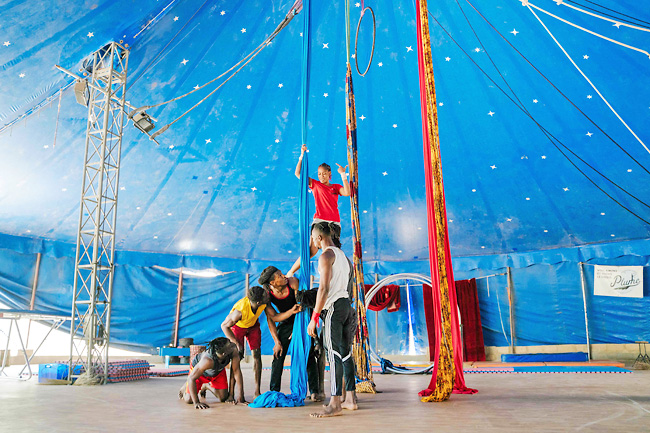 Her family has never approved of the decision. But when she is on stage, Thiam has no regrets.

She is carried by the magic of the moment – and the importance of Sencirk’s mission.

That’s because the circus company also functions as a place of learning for orphans and children from low-income families.

It offers them a chance to learn new skills, find a sense of community – and have some fun.

One of the teachers, Malick Soumah, says Sencirk has changed his life.

The 30-year-old came to Senegal from Guinea in 2015 and was living on the streets until he stumbled upon the company.

Now, through teaching, he can afford to rent an apartment in Ngor, a village-like neighbourhood in Dakar.

On a clear May afternoon on Ngor beach, Malick leaps into the air and looks as though he will fly away, head over heels, his feet appearing to touch a bright, white sun.

One acrobatic feat leads to another, and suddenly Malick is forming a human pyramid with his troupe.

He is both an artist and a teacher, sharing his passion with children in need – children who could one day take up Malick and Marietou’s mantle.

Soon it will be their turn to ascend the pyramid and reach for the stars.