Upon arrival, the RBLF Commander received the honorary salute led by School of Infantry RBLF Acting Commanding Officer Major Faizal Azly bin Haji Rosli. This was followed by an inspection of the parade and a speech by Brigadier General Dato Seri Pahlawan Saifulrizal.

He also reflected on how RBLF had reached its 61 years of glory, continuously evolving throughout the years under the guidance of His Majesty, evident from RBLF’s pioneering moment to its development and modernisation era in line with RBLF’s vision of ‘A Capable and Adaptable Army’. 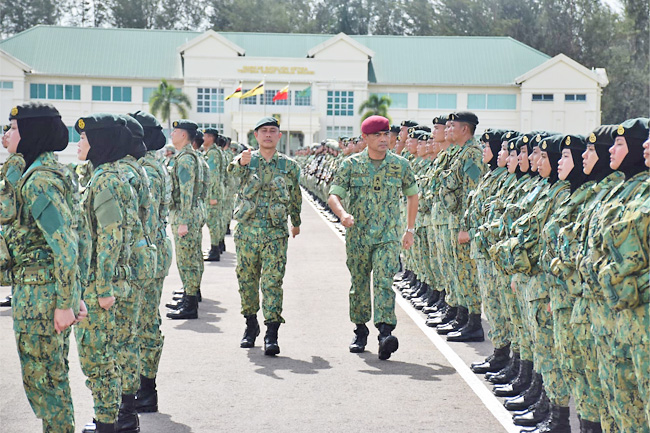 With the consent of His Majesty, the RBLF Commander announced the structuring of the Combined Arms Battalion (CABn), Royal Guards Regiment RBLF, Dental Services RBLF, Medical and Health Services RBLF. He also highlighted RBLF’s achievements throughout 2022, including the consented Field Commander of RBLF with the rank of Colonel, the establishment of Combat Boat Squadron and Intelligence Troop RBLF.

He highlighted the importance of paving RBLF’s future milestones through the Force Structure Review and Force 2035, as well as the “Commander’s Guide” for 2023, which will serve as a source of inspiration and guide throughout RBLF in carrying out tasks and responsibilities.

He reminded personnel not to be complacent, to keep abreast with current affairs and not to take safety and security issues lightly.

The RBLF Commander presented badges to mark the initiation of the personnel from the CABn who were involved in Exercise Semangat Bersatu held from October 11 to 31.

This was followed by the pledge of the Land Force Oath from the guard of honour, recitation of Doa Selamat and a group photo.

The ceremony proceeded to the Officers’ Mess, Lumut Camp, for cake-cutting to mark RBLF’s 61st anniversary before proceeding with refreshments and Doa.

Various activities were organised to commemorate and enliven the 61st RBLF anniversary, including a Tahlil at the Royal Mausoleum on October 27 and Doa Kesyukuran on November 3.