On May 31, the Royal Brunei Armed Forces (RBAF) marked a significant milestone with the celebration of its Diamond Jubilee anniversary.

The significant developments and achievements throughout the RBAF’s 60-year history was showcased through various events, including the issuance of commemorative stamps and first-day covers by the Postal Services under the Ministry of Transport and Infocommunications (MTIC).

Printed in the inscribed value of 60 cents, the stamps come in six different schemes by Dental Administrative Officer at the RBAF’s Dental Services 767 Major Mohammad Azhan bin Haji Ahmad, who won a competition for the designing of the commemorative stamps.

767 Major Mohammad Azhan said designing the stamps took three weeks, but the selection of the designs had to undergo several processes: approval by the Chairman for the RBAF Diamond Jubilee and then by the RBAF Commander, before being submitted to the Postal Services Department for further scrutiny in following the proper requirements for the stamps. Altogether, the process took about four months. 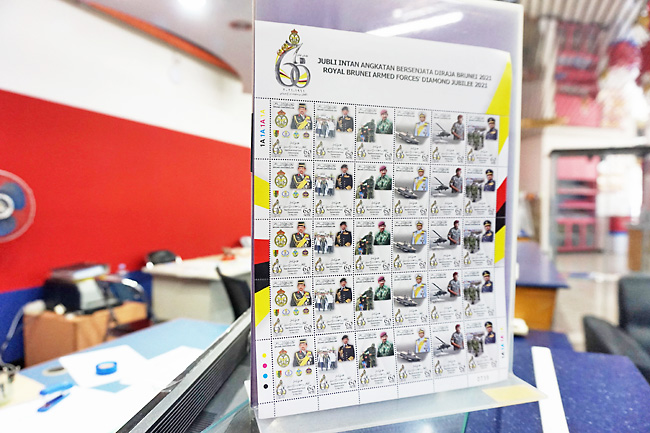 The first design encapsulates the main units of the RBAF, the Royal Brunei Land Force, the Royal Brunei Air Force and the Joint Forces Headquarters led by the Military Commander, while showing a distinction between the Golden Jubilee (RBAF Training Institute Logo and the new Joint Forces Headquarters logo), as well as a diamond pattern background symbolising the Diamond Jubilee.

The second represents the development of local youth by training institutions (the Cadet Officer School and the Recruits Company), which have produced skilled and competent military officers and personnel, including the first female commanding officer.

The fifth stamp symbolises the efficiency and agility of the RBAF in performing various operations such as patrols, search-and-rescue and maritime support operations, while the sixth and last stamp symbolises the RBAF’s capacity for contributing to international missions such as the Independent Decommissioning Body Verification, the Monitoring and Assistance Team (IDB VMAT), the International Monitoring Team and the United Nations Interim Forces In Lebanon (UNIFIL) monitored by Joint Forces Headquarters.

The stamps were produced in limited editions, particularly the 200 miniature sets, which were sold out within minutes at all post office counters.

Only 3,000 first-day covers with and without stamps were printed, along with 3,500 pieces of the one- stamp sheet.

The first-day covers and commemorative stamps are available for purchase at the Bandar Seri Begawan Stamp Gallery; the Berakas Mail Processing Centre; and the post offices in Muara, Sengkurong, Mumong, Seria, Tutong and Bangar.