Brunei Darussalam will celebrate Hari Raya Aidilfitri tomorrow as the hilal or new moon of Syawal 1442 Hijrah was not sighted at vantage points set up yesterday evening.

Officials assigned to the moon-sighting events at the five assigned locations throughout the country were unable to locate the crescent moon of Syawal which was confirmed by the Chief Syar’ie Judge.

The moon-sighting at the DST Tower in Jerudong was attended by Minister of Development Dato Seri Setia Ir Awang Haji Suhaimi bin Haji Gafar as well as senior officials from the Prime Minister’s Office (PMO), Ministry of Development, Ministry of Transport and Infocommunications and Ministry of Religious Affairs (MoRA). 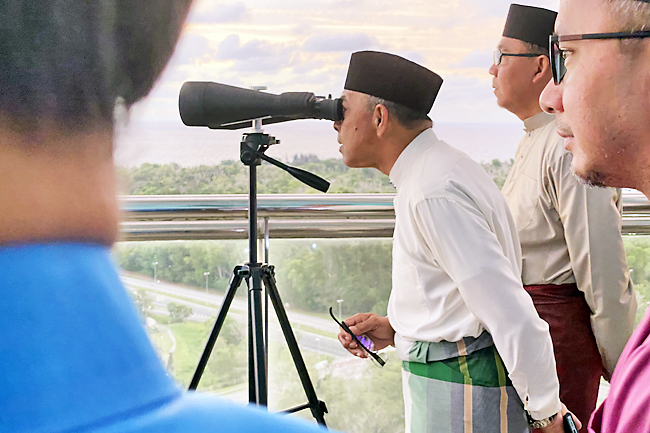 Similar moon-sighting events were held at Bukit Agok in Brunei-Muara District, Bukit Ambog in Tutong District, and Bukit Lumut in Belait District, attended by Syar’ie judges and officers of the Syariah Courts, State Judiciary Department, officials from the State Mufti’s Office as well as officials from MoRA and Survey Department of the Ministry of Development.

Earlier, a religious event while waiting for the moon-sighting results was held at the Multaqa Hall, of the MoRA.

Similar to the previous year, the country will observe another three-day public holiday weekend for the festivities beginning tomorrow.

In view of this, the Ministry of Health (MoH) has issued updated guidelines on Hari Raya gatherings.

The MoH advised large families with limited house space to hold gatherings at a hall and to carry out the scanning of the BruHealth QR code at entry points.

Those showing signs of infection or feeling unwell should refrain from visiting or visited by close family members during Hari Raya.

Shaking hands and hugs can be substituted by placing the hand on the chest, along with a smile or a nod of the head, as a sign of respect and greeting.

Proper hygiene etiquette should be observed at all times, while the sharing of eating and drinking utensils such as spoons, forks, plates and cups should be avoided.