Clear skies in Brunei last night allowed for the easy viewing of a rare Mars occultation in its skies, where the Red Planet disappeared behind the crescent moon.

The phenomenon that happened for about 10 seconds at 9.29pm saw the moon passing in front of Mars creating a lunar occultation visible only from a small region of central Asia including Brunei.

Over 20 members of the Astronomical Society of Brunei Darussalam (PABD), armed with telescopes, binoculars and cameras took part in a viewing at the beach front of The Empire Brunei in Jerudong last night.

According to executive committee member of PABD Nurbazilah binti Zainal Abidin, the phenomenon is rare because it will only be visible in Brunei in the next 77 years.

“We were here from about 8pm, and recorded the whole transition from beginning, from above the moon until it goes behind the moon,” she said. 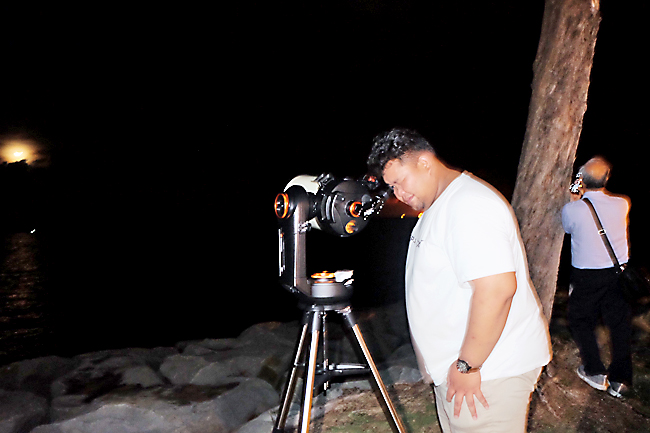 She added that the clear sky made the view easier.

“There was no obstruction, and the sky was clear, which is quite rare.”

She also recalled a moment of panic when some clouds appeared to obstruct the view five minutes before the start of the phenomenon but cleared just in time for the event.

From the naked eye, Mars looked like a bright “red star” close to the moon at around 8pm. It got interestingly closer to the moon by 9pm before disappearing at 9.29pm.

PABD said that an occultation is an astronomical phenomenon when one object is obscured by another object that passes between it and the observer.

Mars will slip behind the moon’s dark side and will be visible to the naked eye. From Brunei, the moon will be very low on the horizon. Lunar gazers must be at a location with an unobstructed view of the Western sky.

Since the moon is the nearest cosmic neighbour to Earth, it regularly passes in front of planets or bright stars. But an occultation by the moon and Mars from the same location on Earth is an exceedingly rare occurrence. It is often described as the “perfect planet alignment”.

The last Mars occultation from Brunei occurred in May 2008. The next in Brunei is set to take place 77 years later, on February 7, 2098.