Raptors clamp down on Miami, top Heat for split

MIAMI (AP) – Another game, another close one for the Toronto Raptors. They’re noticing a trend.

Fred VanVleet scored 24 points, Pascal Siakam added 23 and the Raptors rallied in the fourth quarter to beat the Miami Heat 98-90 on Monday night and split their two-game trip to South Florida.

“I think until we smooth the ship out a little bit, we’re going to be in a lot of close games,” VanVleet said. “Coming down the stretch, you’ve got to be able to execute.” 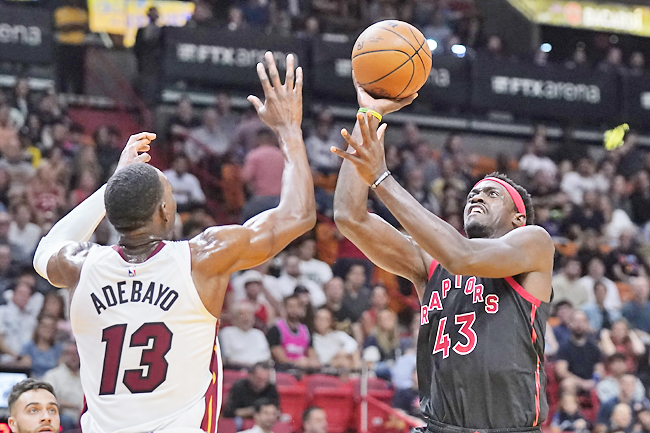 “The East is not for the faint-hearted,” Raptors coach Nick Nurse said.

Gary Trent Jr scored 18 points, including a three-pointer that put Toronto up by six with 22.6 seconds left. Precious Achiuwa grabbed 22 rebounds for the Raptors, the most ever by a Toronto reserve.

Jimmy Butler scored 26 points for Miami, which got 22 points and 15 rebounds from Tyler Herro. Bam Adebayo had 14 points and Duncan Robinson added 12 for the Heat.

Toronto outscored Miami 27-14 in the fourth quarter, getting five 3’s in the final 12 minutes. The Raptors outscored the Heat 42-24 from three-point range, and 27-13 on fast breaks.

“They made shots,” Heat coach Erik Spoelstra said. “They made some big shots down the stretch, even the ones that we were defending pretty well.”

The Raptors were without reigning NBA rookie of the year Scottie Barnes, who sat out with a sprained right ankle and will be listed as day-to-day. Miami was without Caleb Martin and Nikola Jovic, both suspended one game by the league.