THE WASHINGTON POST – How dramatically do humans dominate the Earth? As late as 1800, the total weight of wild mammals was greater than that of all domesticated species. By 1900, with the bison gone and cattle herds roaming the plains of the Americas, cows alone bulked twice as heavy as all remaining wild mammals.

A century later, domesticated animals outweighed wildlife by a factor of 20. In less than the life span of the United States (US) Constitution, the Earth has gone from half-wild to a global farm.

The greatest change by far is in the energy sources that make us the dominant species. To stick with farming a little longer: During the 20th Century, harvested cropland expanded about 40 per cent worldwide to feed a population that grew almost four-fold.

In that time, the energy consumed by farming increased to 90 times its level in 1900, as fertiliser, tractors and factory farms replaced sunshine and muscle with carbon-based fuel.

How vital is all that carbon? In Grand Transitions: How the Modern World Was Made, Vaclav Smil estimates that without the energy-intensive process that produces nitrogen fertiliser, nearly half of today’s population would starve.

As these examples show, Smil is a conjurer with numbers. In Grand Transitions, he works to show just how thoroughly this is now a planet of our making – and how rapidly the transformation is still happening. 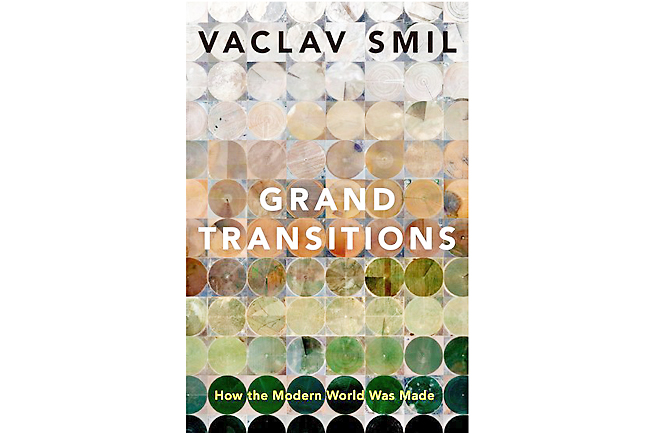 During the first 18 years of this century, global energy use went up almost 50 per cent, with some 85 per cent to 90 per cent coming from fossil fuels. This vaulting increase has been so dramatic that global carbon dioxide levels have risen as much since former US president George HW Bush launched the first US invasion of Iraq in 1990 as they had in all of human history up to Bush’s inauguration. Despite ubiquitous calls for decarbonisation, Smil wrote, “we remain an overwhelmingly fossil-fuelled civilisation that has been recently running vigorously into carbon rather than moving away from it”.

An air of tragedy hangs over this book. Into what are we transitioning, and is it really that grand? In some ways, it is – or has been. After hundreds of thousands of years as a species of a few million, foragers and peasants eking out livings in an unfriendly world, we changed everything in our image.

Several billion people now lead longer, more secure lives than ever before, with choices (of food, work, pleasure) and powers (instantaneous communication, fast and safe travel, the world’s cultural archives at their fingers) that would have struck most previous generations as wild fantasy.

But for all that, we are still animals in the Earth’s biosphere. If soil fertility collapses, or freshwater supply, ocean life, pollinators or climate stability, then (“ashes, ashes”, as the old children’s song goes) we fall down, too. The biggest moral imperative of the next century, Smil argued, is to extend the benefits of energy-powered prosperity to the four billion people (maybe six billion 50 years from now) who have been left out so far. But global progress brings global peril. Most of the 50-per-cent increase in energy use this century was a direct result of China’s growth, with much of the rest coming from India. Three, four or five times that rise in environmental pressure would threaten to “overshoot” the Earth’s capacity to sustain human life.

One response to this bleak dilemma is to deny it: Yes, things look bad, but we can have sustainable growth with enough technological innovation, efficiency gains and infrastructure investment. Smil is not so sure. He argued forcefully that if we wait for sustainable energy to be “cheaper” than fossil fuels, we will be waiting through decades of likely disaster.

Energy transitions tend to be slow, Smil observed, and slower the more infrastructure is involved – like US highways and oil refineries, worldwide trade webs of products from soybeans to silicon chips, and coal-fired power plants in India.

Yes, solar and wind power is getting cheaper, but we still face the technological bottleneck of how to store it: Without a revolution in batteries, highly variable wind and sunshine cannot meet the energy demands of cities, where the world’s population is more concentrated every decade. Efficiency gains in producing goods from raw steel to aluminum cans are reaching physical limits after some decades of dramatic progress. There is no realistic prospect of getting substantial energy waste and fertiliser pollution out of industrial agriculture, which will cover hundreds of millions more acres than today if it is to succeed in feeding billions more people by 2050.

Smil might be offbase in any of these particular forecasts, but he argues that the overall picture is too grim to allow any real prospect of flattening global carbon levels in the next couple of decades. The collision course with the planet’s systems will continue. This means the future will probably be full of more or less dramatic crisis and adaptation: droughts and population movements, floods and new infrastructure; at worst, famine and resource wars. These will be mostly national or regional responses to what is, at root, a global problem. The populations left out of growth so far will suffer most, with the least resources for managing the crises. This is the recipe for what climate journalist Kate Aronoff called “eco-apartheid”.

A physical scientist, Smil turns at last to the reluctant conclusion that the future depends on “the wisdom of homo sapiens sapiens”, but he doesn’t presume to say much about what that means. It might mean politics, which gets almost no attention in this book.

Just as good intentions mean little against the weight of global energy systems – Smil’s warning in a nutshell – wisdom means little in the 21st Century if it can’t be turned to political action. There isn’t time or ecological space to grow or innovate away from all of the coming bottlenecks and attendant crises. There just might be enough will and solidarity to navigate through them without falling into eco-apartheid and to come out of the bottleneck sooner rather than later.

If we can find a way to throw collective effort against the very fossil fuel system that has brought us so far, and put it to rest 50 years sooner than current trends would do, we might face fewer disasters, and along the way we might grow less fragmented and more concerned with shared survival than our own comfort. Our greatest transition yet might be from tragic ecological fate into an economy that would be both sustainable and fair. Or so it is possible to hope.

Alas, in politics as in engineering, we would have to do better in the very near future than we have ever managed in the past.