The International Day of Radiology (IDoR) is an annual event held to build awareness of the value that radiology contributes to safe patient care and improving understanding of the vital role radiologists and radiographers play in the healthcare continuum, Grade II Consultant and Head of the Radiology Department at Raja Isteri Pengiran Anak Saleha (RIPAS) Hospital Dr Lim Kian Chai said.

He said IDoR is celebrated worldwide every November 8 by radiology organisations and societies, including in Brunei Darussalam, marking the anniversary of the discovery of the X-rays by German Physicist Wilhelm Roentgen in 1895.

Dr Lim made these comments in his welcome speech during the IDoR Celebration at RIPAS Hospital on Tuesday.

The theme of this year’s IDoR is ‘Radiologists and Radiographers supporting Patients’. “This year has been an eventful year for us in radiology, where the Picture Archiving Communications System (PACS) was launched by the Minister of Health on October 12, and since then the system has been used in all four districts,” added Dr Lim.

He explained that the PACS system will improve the efficacy and quality of healthcare delivery to patients through the digital storage of medical images which can be easily accessed by medical professionals at any Bru-HIMS terminal in all healthcare facilities throughout the country.

Medical Superintendent Dr Haji Muhammad Nurhasanuddin bin Abdullah Kelali, as well as heads of departments and officers from the hospital were also present.

Opening the event was the recitation of Surah Al-Fatihah and Doa.

In conjunction with this event, several activities have been arranged to promote the role of radiology in healthcare, awareness of the value that radiology contributes to safe patient care, and improving understanding of the roles of radiologists, radiographers and X-Ray technicians in supporting patients.

As users of ionising radiation and being regulated by the local regulatory authority, Safety, Health and Environment National Authority (SHENA), the event will also focus on promoting radiation protection and safety awareness.

A series of online lectures by the Ministry of Health’s healthcare professionals have been organised which will run for four days, while a poster exhibition and interactive quiz activities are also organised to enliven the IDoR celebration which will take place at the lobby of RIPAS Hosital’s Ward Complex, as well as at each district hospital over the next few weeks. 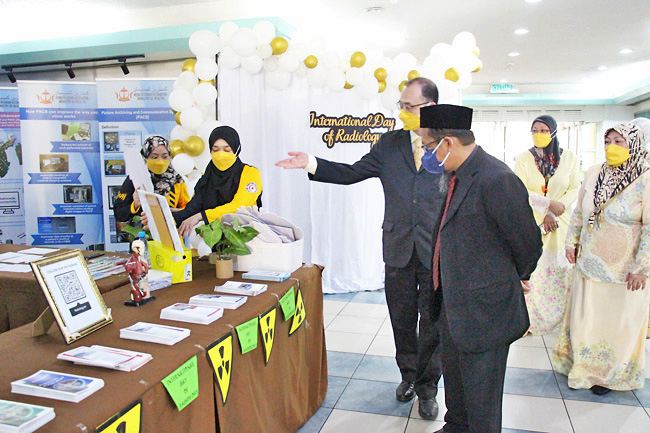