Mohammad Radhi bin Raduan from the Almerez Futsal Academy looks set to reportedly become the first futsal player in the country to play for an overseas team after he was selected to represent the Sarawak United futsal team following a successful trial spell.

The local futsal player – accompanied by coaches Mohammad Norezan bin Mohd Rafee and Muhammad Afiq Afandi – left the country yesterday for Bintulu to complete his medical ahead of a contract signing ceremony, where he will be officially unveiled as a Sarawak United player.

Sarawak United will play in the Malaysian Premier Futsal League 2020.

“I hope that Radhi’s departure and his obligations to his new team will give a lot of encouragement to our younger football players so that they will be motivated to be equally ambitious. At the same time, it gives them the opportunity to be professionals. It will also give a higher profile of the game in Brunei,” said the NFABD President in an interview with the Bulletin.

“From NFABD’s perspective, I hope that his contractual obligation with his new team will inspire younger players, especially those in different academies that there is always opportunities in football provided that you prove yourself, develop your skills, improve your dedication but more importantly you have to be extremely disciplined.”

The President also highlighted that Radhi’s acceptance into an overseas club demonstrates that there is no shortage of futsal talent in the country.

He said, “In terms of Radhi, we are extremely happy that a Brunei talent has been spotted and has been given the opportunity to play for a professional team in Malaysia. That means Brunei is not short of talent but we have to garner and encourage other players to be equally ambitious.”

“It will not only benefit the players but also the clubs and the management. It will give strong impetus to the younger players to be professionals in the future,” he said.

“Looking at things in perspective, we notice that in sports, specifically football and futsal in Malaysia, have risen from strength to strength. It has become such a thriving industry that it gives lots of opportunities for players to be professionals,” said the NFABD President.

Mohammad Radhi said of his move to Sarawak, “First of all, I would like to thank my family for always supporting me, my coaches in Almerez Futsal Academy for guiding me, and NFABD for supporting and assisting in the transfer to Sarawak United. I will do my very best not just for myself but also for my country.”

He added, “Although we are sad to see him leave, we know this is good for everyone. With this achievement, we hope that he will inspire more youth players to venture in sports as a career option.” 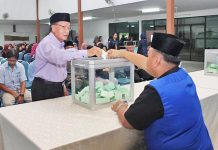