THE WASHINGTON POST – English speakers sometimes talk about “preaching to the choir”, but we rarely mean everything with these words that we might.

The expression usually signals redundancy, perhaps pointlessness. The choristers have already committed themselves to the church, so why bother trying to persuade them? That would be like writing a book about the costs of racism in a world so racially divided that only committed anti-racists will read it.

That is what Heather McGhee has done, of course, which reflects poorly not on her but on United States (US) political life.

The many, many people who think racism is over or overblown, or that its dominant historic forms have been overturned and the oppressors have become the oppressed, will not pick up her book. And, if the studies and surveys are to be believed, the number of people willing to remain suspended between belief and denial, available to have their minds changed, is small and shrinking.

The thing about preaching, though, is that persuasion is not its principal aim. Often, the goal is to send churchgoers back into the world renewed, perhaps edified but surely fortified for the trials that await.

This is what one gets from McGhee’s stunning, sobering, oddly hopeful book, The Sum of Us: What Racism Costs Everyone and How We Can Prosper Together. She is not fishing for converts in a depleted sea. She is encouraging the faithful and equipping them for the kind of intellectual journey that produced her book. 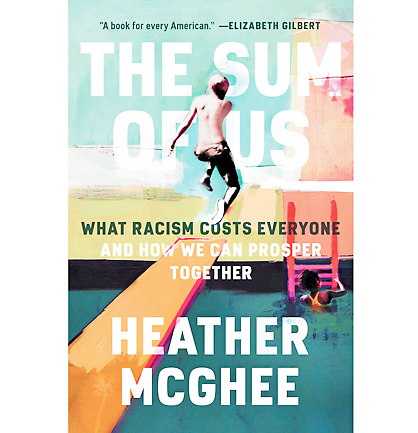 Her journey commenced, she says, after many productive years in the world of policy analysis, eventually as leader of the progressive think tank Demos.

She kept finding people in this world plagued by a peculiar incapacity: They did not understand, and sometimes did not even perceive, that racism was the key obstacle to their work.

Policy initiatives seemingly at some remove from racial politics kept running aground on racial politics, but her colleagues, like most citizens, either didn’t notice, pretended not to notice or decided the less said about it the better.

So she left Demos and set off on a Wanderjahr, to figure out how racism could so often be the answer to an increasingly pressing policy question: Why can’t we have n
ice things?

History shows US society repeatedly refusing itself goods like these on racial grounds. Better not to have them at all than to allow people of colour to enjoy them.

When I said “US society”, I am of course talking about a society that for most of its history explicitly imagined itself as a White society and that for some time explicitly embraced what its own leaders called “white supremacy”.

And when I said this society refused and refuses itself nice things, I mean that it deprives everyone, White people included, in order to deprive Black and Brown people.

And when I said “White people” I mean some White people, because others command the kind of influence that allows them still to enjoy the nice things.

The ones who lack influence nevertheless agree to this arrangement because, as McGhee notes, they receive what WEB Du Bois long ago called the “psychological wage” of Whiteness. This means that the ones with influence tell the ones without that you may not get rich and you may not get health care, but you get to be White, by gum, and that’s a darn sight better than being a dirty (blank), and at least the dirty (blanks) don’t get to sponge off your tax dollars.

And when I said that some of these people still get to enjoy the nice things, I mean of course only those nice things that can be parceled out to some and not others. The class of such things turns out to be quite small.

The inequitable distribution of healthcare makes everyone’s health more precarious, as the pandemic reminds us. Climate catastrophe mostly ignores the boundaries between good neighbourhoods and bad. And so on.

I’ve consented to say all of that with unpardonable crudeness because I can simply send you to McGhee’s book to get the detail I’ve skipped.

Each chapter sets up a core problem – What happened to unions? Why are there so few public pools (or, why is our sense of the public so emaciated)? Why are our social networks so segregated? – and carefully unpacks the sordid histories that produced it, the policy choices that enable it and the stark choices that proceed from it. I don’t know of another book that weaves together the many strands of our racialised policy, politics and culture this elegantly and clearly.

Each chapter uses stories to stress the human scale not just of the problems but also of the solutions. McGhee’s cross-country journey to see the impact of our problems on specific places and people produces an itinerary of devastation, to be sure.

But it also offers an invitation to hope. She meets, among others, a reformed white supremacist who now preaches anti-racism, some victims of racialised predatory lending whose resistance led to a class-action victory, and the (mostly) White residents of a dying Northeastern town that has revitalised itself by embracing African immigrants. These stories of change and shared benefit capture McGhee’s central ideas.

Society is a cooperative project, not a zero-sum game. Abandoning the zero-sum thinking at the heart of US history – which pits racial groups against one another, as if one can win only if others lose – will unlock the benefits of social cooperation.

The result can be a “solidarity dividend” that easily outweighs the meager rations of racist division and purely psychic wages.

This is a powerful case. It will of course not convince the people who most need to hear it.

Not because the evidence is scarce or the arguments are conceptually challenging. It isn’t, and they aren’t. It will not persuade the unbelievers because racism has done its work too well.

It has eroded the very conditions under which evidence and argumentation can do their work.

In one of her stories, participants in a study watch videos of identical – identical – neighbourhoods, one with Black actors posing as residents, one with White actors. Guess which one the viewers consider more desirable?

The zero-sum sensibility relies on aversion, not just on ideas. It relies on distaste, on the feeling one has in the presence of vermin. It’s hard to imagine being in solidarity with a cockroach.

These felt limits on the prospects for solidarity make it important, sometimes, to preach to the choir. Legions of people already accept some version of McGhee’s diagnosis, beginning with other readers of Du Bois.

But many of them don’t know what to do with it, or what it means in policy terms, or whether it leaves any room for hope in a world of people willing to treat others as an infestation.

The Sum of Us begins to answer these questions, thereby equipping the faithful to act on the good news even in a world that isn’t yet ready to hear it.