BETHLEHEM, PALESTINIAN TERRITORIES (AFP) – In the heart of Bethlehem, in the occupied West Bank, Palestinians with learning disabilities are front and centre at a new boutique hotel welcoming guests from across the globe.

Showcasing their skills at the hotel is intended to make Palestinians with disabilities more visible and overhaul perceptions within the community.

“Slowly, slowly, we (can) change the idea in the whole society, in the whole world, because here in Bethlehem we receive guests from the whole world,” said Mahera Nassar Ghareeb, the community leader of Maan lil-Hayat, an organisation which supports Palestinians with intellectual disabilities.

Maan lil-Hayat (Together for Life), which was founded in 2009, is just weeks into its hotel venture in a restored 19th Century house.

From the upper floor, where the original stone walls and tilework have been preserved, Ghareeb explained that those with disabilities can help with everything from doing the laundry to serving food.

“We tried to see what abilities our core members have and we try to let them do what they can, with some training in order to improve their abilities,” she said.

Around 40 Palestinians from the Bethlehem area are members of Maan lil-Hayat, some of whom have Down’s syndrome, autism or disabilities related to head injuries. 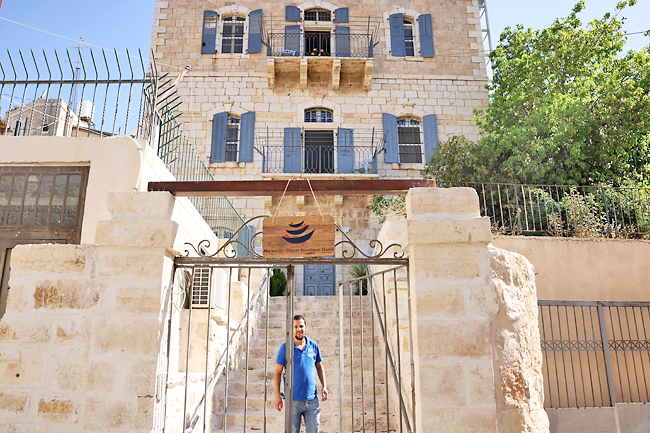 A handful of them will take on tasks at the 12-room hotel, working alongside the same number of staff who do not have disabilities.

Mariam Kansan, who has learning difficulties, is busy preparing a room overlooking the hills of southern Bethlehem. “I grew up at Maan,” said the 27-year-old.

For her, the best part of the organisation is the friends she has made since she joined as a teenager.

The group meets together every weekday morning, and for years has been using wool sourced from local shepherds to make crafts for sale. Taking on her new role, Kansan’s morning tasks at the hotel also included clearing the table after French guests Veronique Gandon and Herve Tisserand finished breakfast.

Tisserand, 64, who enthused about the building’s historic frescoes featuring big cats and an angel, said he found the hotel “rather extraordinary”.

Gandon said they were unaware of the community project when they made their reservation, but were glad to see it.

“I think it’s a good idea if it can help the association to have more revenue… It’s also a way to make their association known,” said the 62-year-old.

The search for a regular income was, in fact, one of the main drivers for opening the hotel, Ghareeb said.

Maan also receives donations and makes some money from selling its wool products, but “we don’t have a stable donor, so we had to depend on ourselves since the beginning”, she said.

The West Bank has been occupied by Israel since the 1967 Six-Day War, with Bethlehem and other cities administered by the Palestinian Authority (PA).

In May the World Bank warned that the Palestinian economy was in a “precarious” state.
The PA faces a fiscal deficit of more than five per cent of gross domestic product, before financial aid, according to the World Bank.

There are insufficient funds to meet the needs of the territory’s intellectually disabled.

Renovating the hotel, which carries Maan’s name, cost around USD200,000 and was funded by donors from Switzerland, Germany, Italy and Canada.

Founder of Albergo Etico Antonio De Benedetto, said his team “lead them to their independent life” by giving staff a wide variety of skills such as cooking.

Speaking from Italy where he is due to host members of Maan later this year, De Benedetto said he is also keen to link Palestinian parents with their Italian counterparts, who can serve as an “antidote to fear” for wary families.

Around five per cent of Palestinians in the West Bank have a learning or physical disability, the Palestinian Central Bureau of Statistics estimates.

Across the globe about 15 per cent of the population lives with a disability, according to the World Health Organization.

In Bethlehem, Ghareeb said many families “feel it’s a burden” to have a relative in that situation.

“They do not even let the visitors, let the neighbours see them or know about them,” she said.

“Either they are locked at home, or they are running in the streets doing nothing and no one is taking care of them.”

The hotel project is not just about giving them an opportunity “to be part of the team”, Ghareeb said. “It’s also to change the reality, to change the society.”