The Berakas Power Company Sdn Bhd (BPC) is a government linked company (GLC) and subsidiary of Darussalam Assets Sdn Bhd. Its mission is to operate, maintain and develop the Berakas Power System (BPS) in accordance with best international practices and to provide engineering, design and project management services for power system infrastructure projects, while upholding its vision of ‘providing power and expertise to serve you’.

This was stated by BPC Engineering and Projects Principal Engineer Dr William Voon during a two-part presentation on the 200 kWp Berakas Power Company Roof Top Solar PV at the Renewable Energy Policy and Development Forum in conjunction with the Brunei Mid-Year Conference and Exhibition (MYCE) 2021 as part of the Energy Theme Week, where the ‘Roof Top Solar Photo-Voltaic (PV)’ was one of the main focus topics.

The principal engineer said BPC’s core activities include the operation, maintenance and development of the BPS; the execution of major power system infrastructure projects on behalf of the Government of Brunei Darussalam for the Department of Electrical Services (DES) under the Ministry of Energy (ME); the provision of technical support to the DES; and the provision of consulting and utility training services to the DES and third parties.

There are two power systems in the country – the DES Power System and the BPS. The BPS comprising power stations and transmission and distribution networks in the Brunei-Muara District, has been operating since 1992 and supplies approximately 40 per cent of the national electricity demand, including most of the strategic and VVIP locations. The BPC workforce is multi-skilled with the majority of its work being carried out in-house.

Dr Voon, in putting focus on the first part of the presentation, detailed ‘Solar PV Energy and Relevant Design Considerations’, emphasising the importance of getting the design right the first time around to get the project going. 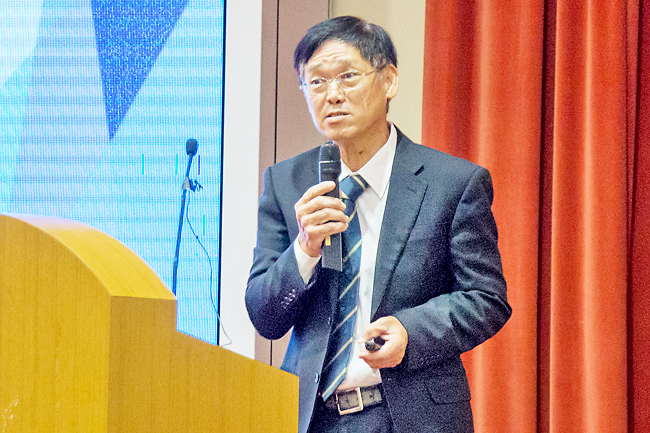 “It is important to understand where the energy comes from, which includes the seasonal passage of the sun through the Earth’s rotation around it, where the objective is to optimise and harvest solar energy from the sun, along with the monthly sun paths throughout the year, as well as the influence of latitude on panel orientation for optimum collection of sunlight.”

He touched on monocrystalline PV modules’ effect on shading and operating efficiency, and variation in solar irradiance and temperature through power conditioning.

“As we know, the ME is committed to increasing the share of renewable energy to at least 30 per cent of total power installed capacity, which is around 300 megawatts by 2035 using mainly solar photo-voltaic,” he said. “BPC has taken the initiative to implement the first rooftop solar PV system in support of the Ministry’s 2035 target.”

Muhd Khairul Anwar said some of the materials used in the project, including top tier LG 420W Neon 2 solar panels, Sunny Tripower 25000TL inverters and Schneider C60PV-DC MCB are specifically for the PV. The actual solar yield from the project is 129,905-kilowatt-hour from a total of 156 days since its installation, with an actual yield of 4.36 kilowatt-hour/kilowatt-peak, CO2 avoidance of 95.17 tonnes, cost savings at BND0.065/kilowatt-hour totalling BND8,443.83 and MMBTU gas savings at USD7.00/MMBTU totalling BND13,368.58.

Looking ahead, he said the BPC is looking forward to the BPC Solar R&D installation at Berakas Power Station, with plans for implementation of PV solar systems in BPS 11kV network such as the Lumapas substation, and installations at the Temburong District in support of the ME’s Green Energy projects, electric vehicles (EV) and charging stations in collaboration with the Ministry of Transport and Infocommunications (MTIC) and the ME, and the Jerudong International School (JIS) PV project.