AHMEDABAD, INDIA (AFP) – Indian prosecutors have blamed a company that renovated a suspension bridge for its collapse at the weekend in which more than 130 people were killed.

Contractors installed heavier flooring during work on the 150-year-old bridge in Morbi but did not replace a rusty main cable.

Police believe the structure snapped due to excess weight when it was crowded with visitors on Sunday, plunging 135 people to their deaths in a river below.

Nine people linked to the Oreva group, a watch and e-bike manufacturing firm that had a contract to manage the bridge, have been arrested on manslaughter charges.

“The main cable of the bridge was not changed during renovation,” he said.

“The police also believe that the weight of the bridge increased due to the four-layer aluminium flooring done by the contractors, which may have resulted in the bridge collapse,” he added.

The 230-metre-long structure, a major tourist attraction in the area, was only re-opened last Wednesday after nearly seven months of renovations that are said to have cost INR20 million (USD240,000).

Authorities in the western state of Gujarat say the proper safety certificates were not obtained before visitors were allowed to return. At least 47 of the victims were children. 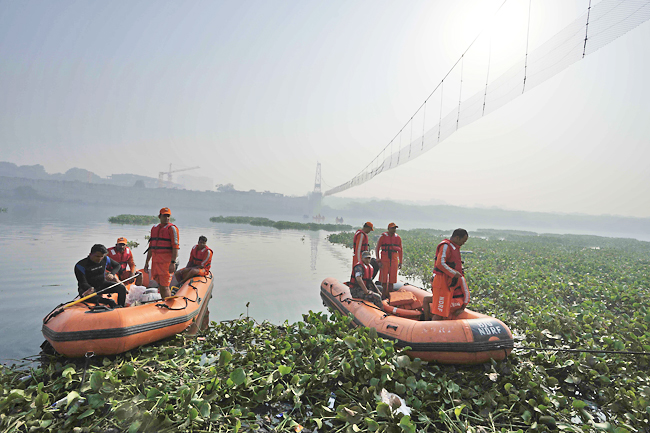