ANN/THE STRAITS TIMES – An investigation is under way after a video emerged on social media allegedly showing a boy throwing a cat off the 22nd storey at a Housing Board block in Boon Lay.

Responding to queries, Animal Veterinary Service (AVS) group director Jessica Kwok said yesterday, “Investigations on the case are ongoing and we ask the public not to speculate on the details of the case and allow investigations to run its proper course.”

A one-minute video circulating on social media on Thursday night shows what appears to be a black cat walking out of a lift followed by the young boy.

Seconds later, he picks the animal up and after looking around, throws the cat over the railing.

Within moments, a loud crash can be heard. 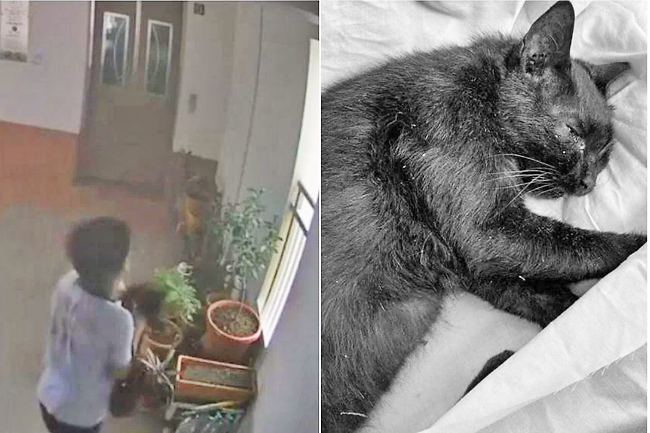 The police confirmed that a report has been lodged.

The Straits Times understands that the boy has not been arrested or taken into custody.

Kwok said the AVS, which is part of the National Parks Board, does not condone mistreatment of pets.

First-time offenders caught abusing an animal face a fine of up to SGD15,000, a jail term of up to 18 months, or both.

Boon Lay resident Chua Mui Mui, 47, who regularly feeds community cats in the area, said she received the video on Thursday and posted it on Facebook.

“In the past two to three years, five cats were thrown off from the same block,” she said, adding that she had been feeding the cat, named Panther by residents, for about seven years.

“We are still in shock. The regular feeder and I cried a lot when we found out about Panther’s death.”

The cat was buried in the area by some residents.

A Change.org petition calling for justice for the cat garnered some 6,500 signatures as at noon yesterday.