HANOI (AFP) – In a small corner of a once-grand villa in the heart of Hanoi, Nguyen Manh Tri surveys the home he has loved since childhood but is now giving up as its foundation cracks, roof crumbles and staircase buckles.

Tri, 47, lives in three rooms of the subdivided house, one of around 1,200 French-style villas in the city on a list of protected homes published this year.

Most of the villas are close to a century old, built during French colonial rule, and have been degraded by age and humidity.

Despite their protected status, the future of these homes – and their inhabitants – hangs in the balance, say architects, as residents struggle to afford their upkeep and the state flip-flops over how best to preserve the crumbling heritage of Vietnam’s capital.

“When I was a kid, I remember this was a beautiful house,” said Tri of the 1930s villa where he was born, which weaves local design and elements of the Art Deco movement.

“It was romantic. I could hear the bell from the post office and the sound of the train in Hanoi station.” 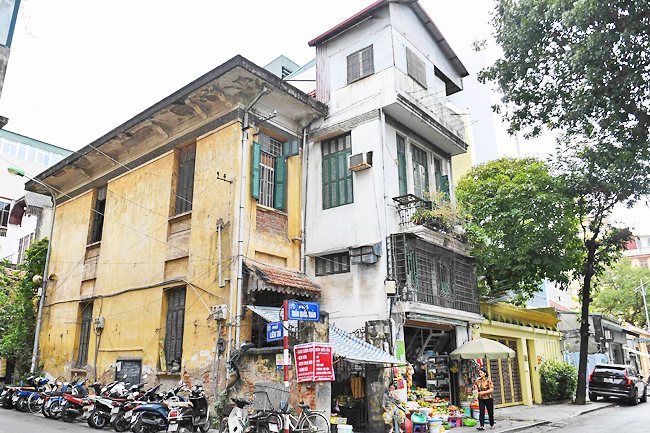 But since then the outer shell of his home has begun to crumble and inside “the structure of the house has been deformed” as families built makeshift extensions, trying to eke out a little more space, Tri told AFP.

Cracks are spreading across the walls, ceilings and balconies, and clay tiles plunge from the wide, overhanging roof – prompting his family’s decision to move out.

The listed villas – now often hidden behind cafes, noodle shops and fashion boutiques – were built both by the French and by Vietnamese architects for their wealthy compatriots working under the colonial power.

When the French left in 1954, thousands of these homes were taken over by the communist government and turned into offices, while authorities required any owners still in Vietnam to divide up their property and give portions to poor Vietnamese.

Some private owners, such as Tri, are now keen to escape the villas for modern apartments, but others prefer to stay despite the poor conditions and without knowing if their homes will survive the coming decades.

“I have been living here my whole life, so I don’t want to move anywhere else,” said 65-year-old Hoang Chung Thuy, who shares her three-storey villa with 10 other households, a seafood restaurant, a clothes shop and a tea stall.

She cannot fix the crumbling walls without approval and money from her neighbours upstairs but she is determined not to leave the house her grandparents built.

“Those built at the beginning of the 20th Century… need continuous renovation and maintenance every 20 to 30 years, it should not be longer.”

Authorities first drew up regulations to protect the villas in 2013, but have gone back and forth over the path forward for the homes.

A large swathe of villas has already been razed, Anh said, while in April the city announced a plan to sell 600 of those owned by the state, before retracting the idea just days later.

Now Hanoi says it aims to renovate 60 by 2025, but faces long drawn-out negotiations to convince each and every resident to move.

It took a decade for the first project – a one million restoration of an old villa – to begin.

But now the city is determined to return the house to its former glory, says Pham Tuan Long, an architect and chairman of Hoan Kiem district, where this villa and Tri’s are found.

“We are trying to preserve the original elements and architectural values as much as possible by using traditional materials and traditional renovation techniques,” Long said.

But just a few streets away, Tri packs up his home, uncertain of its future.

Moving out is difficult, he says, but even harder is imagining a time when the house is no longer standing.

“It has been a part of my life. This house is the place where I was born, got married, had my kids,” he said.

“But we can’t get out of this situation.”