Preparing for the worst

NEWARK, NEW JERSEY (AP) – Shubham Chandra knows how dangerous the coronavirus can be. He lost his dad during the pandemic. So when he cleared customs at Newark Liberty International Airport and saw people offering anonymous COVID-19 testing, he was happy to volunteer.

“It’s a minimum amount of effort to help a lot of people,” said the 27-year-old New York City man, who had just stepped off a plane from Cancun, Mexico.

The airport testing is part of the government’s early warning system for detecting new variants, which began expanding recently in the wake of a COVID-19 surge in China.

With the addition of Los Angeles and Seattle, there are now seven airports where arriving passengers can volunteer for COVID-19 tests.

The Centre for Disease Control (CDC) and Prevention programme now covers about 500 flights from at least 30 countries, including more than half from China and surrounding areas. 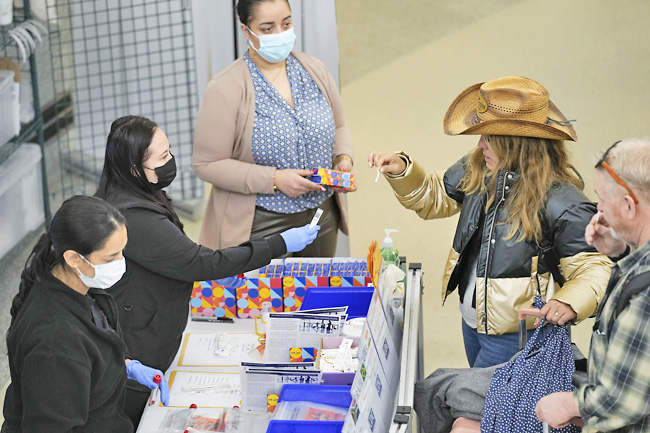 As of Thursday, the CDC is also requiring travellers to the United States (US) from China, Hong Kong and Macao to take a COVID-19 test no more than two days before travel and provide a negative result before boarding a flight.

And down the road, some scientists are calling for wider use of an additional strategy, screening wastewater from toilet tanks on arriving airplanes.

Some scientists are worried the COVID-19 surge in China could unleash a new coronavirus mutant on the world, since every infection is another chance for the virus to change. There’s no sign of a new variant from China at this point.

But one reason for new testing requirements, according to the CDC, is a lack of adequate and transparent information from China on viral strains infecting people there.

Epidemiologist Katelyn Jetelina, a consultant to the CDC said, “We have very little control over what happens elsewhere. What we can control is what’s happening in the US.”

Chief of CDC’s travellers’ health branch, Dr Cindy Friedman said, the airport programme is based on an unfortunate reality, “Travellers… go across the globe quickly and they can get and spread infectious diseases really fast.”

Friedman said the programme is a partnership with two companies that take care of the testing and lab work, XpresCheck and Concentric by Ginkgo. A pilot programme was expanded around the time the first omicron variant emerged in the US more than a year ago. Besides Newark, Seattle and Los Angeles, the programme includes New York’s Kennedy, Washington’s Dulles and airports in Atlanta and San Francisco.

The latest expansion of the traveller surveillance programme aims to capture more flights from China.

But on Wednesday in Newark, some of the targetted planes arrived from Mexico, France and Belgium. After clearing customs, travellers could stop at a table, swab their noses and fill out a form. Chandra said it took about a minute.

Like other travellers, he won’t get the results. But he tests for COVID-19 when he flies to Ohio every other month to see his mom, he said, since “the last thing I want to do is bring (the virus) home to her”.

About 10 per cent of people on targetted flights volunteer. Their samples are pooled and PCR tested. Positive ones are genetically sequenced. Volunteers get free home COVID-19 tests.

Over time, Friedman expects the programme to grow and potentially go global. It’s already shown it can spot coronavirus variants early, detecting Omicron variants BA.2 and BA.3 and reporting them to a global database weeks before others did.

But Jetelina said a surveillance programme at seven airports is “just not that big” so trying to spot variants might be like “looking for a needle in the haystack”.

“It’s a little gross when you start thinking about it,” Jetelina said. “But these are really long flights and we would expect the majority of people would go to the bathroom.”

The CDC, which monitors wastewater in municipal systems, ran a pilot programme last summer testing airplane wastewater at Kennedy airport. Friedman said the agency is working to expand this type of surveillance.

Such testing has been used elsewhere. A study last year in the journal Environment International looked at wastewater testing from 37 flights chartered to bring Australians home earlier in the pandemic, concluding that the practice “can provide an additional and effective tool” for monitoring the virus coming into a country.

Recently, Canada announced an expanded wastewater pilot programme and Belgium said it would test wastewater from airplanes coming from China.

As surveillance continues, scientists believe that the Omicron variant BF.7, which is extremely adept at evading immunity, is driving China’s current surge. CDC data shows BF.7 is already in the US, and currently accounts for about two per cent of COVID-19 cases.

The most prevalent mutant in the US is XBB.1.5, another variant responsible for 41 per cent of US cases.

Ray said this one attaches more tightly than its competitors to a receptor that allows viruses to enter a cell.

Scientists said the virus will surely keep evolving, which is why they need to keep searching for new variants.

The coronavirus is like a predator stalking humanity, Ray said, and “the predator adapts to the prey”.