NUNHEAD, UNITED KINGDOM (AFP) – Consultant Rachel Watson enjoys being based at her home that looks onto the London skyline but misses the office vibe. She will soon get the best of both worlds as Britain’s Covid lockdown eases.

United Kingdom (UK) businesses are planning for a hybrid or flexible workplace, splitting time between home and offices when the latest restrictions are finally relaxed in June.

Watson worked mostly in London’s City finance district, for corporate procurement specialists Proxima, until the Covid-19 pandemic erupted one year ago and turned the area into a ghost town.

The 34-year-old Scot now works for Proxima from the apartment she shares with pet beagle Kobe in the south London suburb of Nunhead, 9.6 kilometres from the office, with a window view of London’s Shard skyscraper.

“I do enjoy working from home in terms of having more of a work-life balance – being able to spend more time in my community, being able to switch off work and be in your home – and I don’t miss the commuting so much,” she told AFP from her living room desk.

“But I do really enjoy the office and being surrounded by clients and having a real separation between where work is and where home is.”

She added, “I miss the social side… There’s always been a lot going on. We had a really good office vibe before all of this.” Hybrid working 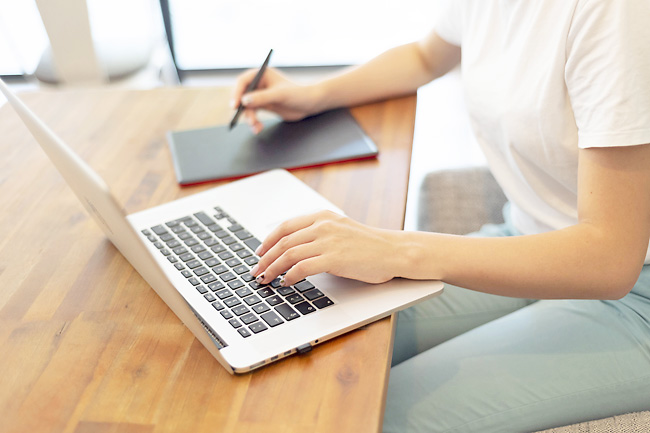 Surveys indicate that a hybrid or flexible working week, divided between home and office, will be popular among huge numbers of workers.

Think-tank Demos found that 65 per cent of Britain’s working population was forced to switch to either working from home or pause their job.

In an update after interviewing 20,000 adults in December, Demos added that 79 per cent of people working from home wanted to continue doing so after the lockdown is lifted, either on a part-time or permanent basis.

As Britain’s vaccination drive quickens, many companies are making preparations to blend home and office working hours with the aim of boosting staff health, morale and productivity.

Corporate giants including banking groups HSBC and Nationwide banks, accountants PwC and British Airways are among those eyeing a hybrid approach for office staff.

“A hybrid approach to working allows for a better work-life balance,” Watson said.

Proxima in September rolled out a flexible policy that allows employees to choose how and where they work going forward.

Most office staff followed government advice to work from home during lockdown, although many have struggled in cramped living conditions.

United States (US) investment banks meanwhile do not appear overly keen on the future
of teleworking.

Goldman Sachs boss David Solomon labels remote working an “aberration” that does not suit its collaborative culture, while JP Morgan’s Jamie Dimon argues it has had a negative effect on productivity.

Franco-Russian banker Vladimir Olivier, 30, has returned to his London office for one day a week since February.

Before the pandemic, the Societe Generale employee worked five days a week in the office, travelled a lot and met customers.

“What I miss is the human contact. You don’t do this job… to be locked up in your room all day behind a screen,” he told AFP at his home in the eastern borough of Hackney.

“I think that what sometimes makes work bearable or enjoyable is the interaction with colleagues and friends from the office.”

British Finance Minister Rishi Sunak has urged companies not to abandon offices altogether, amid concerns that retail and hospitality businesses in city centres could collapse as offices remain largely empty.

Under the UK government’s phased plan to re-open the economy, all social distancing rules will be lifted on June 21 – which could permit the re-opening of offices.

Companies though will reap the benefits of a more flexible approach to work, according to business lobby the Confederation of British Industry.

“Yet there is a balance to be struck as firms move towards a hybrid model of working.

“The rewards are clear; engaged and energised workforces contributing to rising productivity growth,” he added.

“For large areas of the economy, flexible working can benefit both employers and employee well-being – so something good will eventually result from the huge shock to the economy caused by the pandemic.”