GENEVA (AFP) – The rhino’s survival remains in grave danger despite COVID-related drops in poaching and the illegal trade in their horns, a conservation body said on Monday.

The International Union for Conservation of Nature (IUCN) said that poaching was still “an acute threat” to the survival of the species.

A total of 2,707 rhinos were poached in Africa between 2018 and 2021, according to the IUCN, the vast majority of which were killed in South Africa, mainly in the Kruger National Park.

South Africa is home to nearly 80 per cent of the world’s rhinos.

Rhino poaching rates in Africa have declined from a peak of 5.3 per cent of the total population in 2015 to 2.3 per cent in 2021, the Swiss-based organisation said.

“The overall decline in poaching of rhinos is encouraging, yet this remains an acute threat to the survival of these iconic animals,” said scientific officer with the IUCN African Rhino Specialist Group Sam Ferreira.

He told AFP there was no formal analysis into why poaching rates were declining. 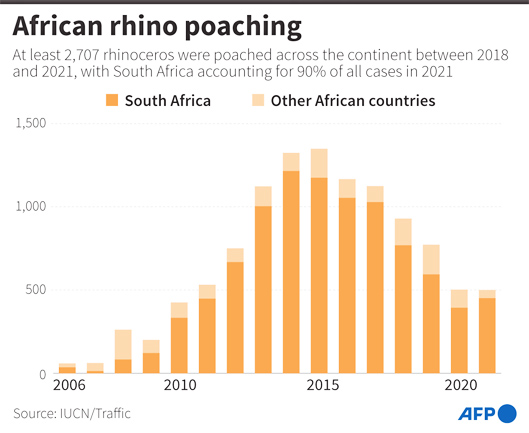 “A number of factors could lead to this slowing, including improved local cooperation in law enforcement, international collaboration between range and consumer states, as well as changes in the demand for rhino horn”, said Ferreira.

The IUCN said 2020 was an abnormal year, with lockdowns and restrictions due to the COVID-19 pandemic seeing several African countries witnessing dramatically-reduced poaching rates.

South Africa lost 394 rhinos to poaching in 2020, while Kenya recorded no rhino poaching at all that year, it said.

However, as COVID-19 travel restrictions were lifted, some countries reported new increases in poaching activities: 451 rhinos were poached in South Africa and six in Kenya.

“These numbers are still significantly lower than during the peak in 2015, when South Africa alone lost 1,175 rhinos to poaching,” IUCN said.

IUCN said the number of white rhinos – which it classifies as vulnerable on its Red List of Threatened Species – declined by almost 12 per cent from 18,067 to 15,942 during this period.

However, the number of black rhinos – deemed critically-endangered – rose by 12 per cent to 6,195.

“It is essential to continue active population management and anti-poaching activities for all subspecies across different range states,” the IUCN said.

However, in 2019, before the pandemic, the reported seized weight of illegal rhino specimens reached its highest point of the decade, possibly due to increased regulations and law enforcement efforts.

IUCN said the numbers of one-horned rhino, found mainly in India and Nepal, and the critically-endangered Javan rhino, had increased since 2017. Their numbers in India and Nepal increased from an estimated 3,588 in 2018 to 4,014 at the end of 2021, it said.

This was “thanks to conservation efforts, including strengthened law enforcement”, it added.

The IUCN classifies the Sumatran rhino, the smallest of all rhino species, as critically endangered.

The World Wild Fund for Nature estimates that fewer than 80 Sumatran rhinos remain in the world, mainly in Indonesia on the islands of Sumatra and Borneo.

The IUCN report said 11 rhino poaching incidents were recorded in Asia – 10 in India and one in Nepal – since the beginning of 2018, all of which involved greater one-horned rhinos.