The first Nintendo Direct of 2021 streamed online on February 17 (February 18 locally), highlighting updates and game announcements expected on the Nintendo Switch in the first half of this year.

One of the biggest highlights of the 50-minute presentation was the announcement of the latest instalment of the Mario Golf series, Mario Golf: Super Rush, set for release on June 25.

“Enjoy golfing with familiar Mushroom Kingdom characters on courses filled with lush, natural scenery. Use features on the greens, like a shot gauge to see how your shot curves due to slopes, and a scan that lets you examine a course’s terrain,” shared during the presentation. In addition to button controls, the game features motion controls where the player can hold their Joy-Con controller like a golf club and gently swing the controller to have their character swing in the game.

There are also several modes and new elements, such as Speed Golf mode. “Here it’s always your turn. Everyone tees off at the same time and then you’ll race through the course to reach your ball.

“Give it another whack to get it closer to the hole, then keep going. Outpace your opponents to come out on top. Your golfing skills aren’t the only things in play; make use of dashes and special shots to beat the competition.”

The game also features a Story Mode where the player, as a Mii character, starts out as a rookie and develops their golfing skills while interacting with various characters from the Mushroom Kingdom. In this mode, players level up with experience points gained during matches and then allocate points to different stats to develop their character. 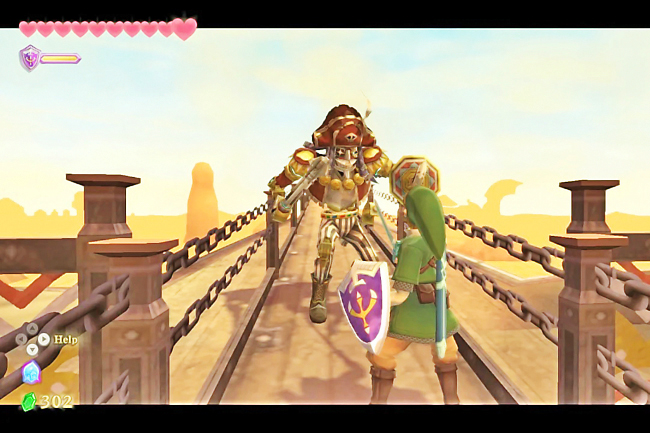 Another major announcement was that The Legend of Zelda: Skyward Sword HD will be launching on the Switch on July 16.

As the producer of The Legend of Zelda series Eiji Aonuma explained, “This game originally released in 2011 on the Wii console, and now it’s coming to Nintendo Switch.

With the processing power of the Nintendo Switch system, the controls are smoother and even more intuitive, and we’ve recreated the controls on the sword and the shield by having the player hold two Joy-Con controllers.”

“You can perform other actions like using both controllers to wield a bow and arrow. These physical movements add a sense of urgency and tension to combat.”

They have also made it possible to play the game with button controls to ensure it can be played in handheld mode or on the Nintendo Switch Lite.

“After mulling over how to assign different gameplay elements to different buttons, we decided to apply the sword motions to tilting the right control stick.”

“We hope the people who played the original game on Wii and those playing it for the first time will enjoy discovering the origins of The Legend of Zelda,” added Aonuma.

Also shown was a new trailer for Monster Hunter Rise, an action role-playing game coming to Switch on March 26, was then featured, showcasing some characters and monsters.

As one of the in-game characters stated in the trailer, “50 years ago, Kamura Village was attacked by the Rampage and Magnamalo, and we suffered some devastating casualties. Our hunter is about to face the biggest challenge yet!”

The Direct featured some upcoming role-playing games (RPGs) from Square Enix, beginning with the announcement that after more than 20 years since its initial release, action RPG Legend of Mana is getting a re-master with HD graphics, and arrives on Switch on June 24.

The game sees players set off on a journey to find the mystical mana tree seen in a dream before discovering the world map is empty.

“During your travels, you’ll acquire special artefacts; place these wherever you’d like on the map to bring towns and dungeons to life and advance the story.”

The music has been rearranged for this enhanced version, with the option to alternate between the new arrangement and the original soundtrack.

Other features have also been added, including the ability to turn off enemy encounters as well as a new mini-game called Ring Ring Land.

Another notable highlight of the Direct was Project Triangle Strategy (working title), a brand new tactical RPG from Square Enix set to launch in 2022.

“Far, far away lies the continent of Norzelia, comprised of three nations (Glenbrook, Aesfrost and Hyzante) and limited deposits of salt and iron,” shared the presentation.

“The constant feuds among the nations over these precious resources eventually ignited into a great conflict known as the Saltiron War.

Though the hostilities ceased with an uneasy truce, decades later the flames of war threatened to engulf the realm once again. Caught in a tangled, fiery web of plots and conspiracies, a brave group from Glenbrook fights to save their kingdom from the powers that would orchestrate their downfall.”

A demo version of the game, entitled Project Triangle Strategy Debut Demo, was announced with immediate availability, and it was shared that a survey will be conducted to gather player feedback on the demo.

Another trailer from the Japanese game publisher during the presentation was for Bravely Default II, with a February 26 release date. This RPG sees a sailor, a princess of a lost kingdom, a scholar and a mercenary join forces and embark on a grand mission, featuring turn-based battles with a risk/reward system and allowing players to customise each party member with an array of different jobs, skills and abilities.

In addition, April 15 will see the launch of Square Enix’s SaGa Frontier Remastered, which sees the 1998 role-playing classic return with improved graphics, additional features and a new main character.

“Experience this role-playing adventure as one of the eight heroes, each with their own storyline and goals. With the Free Scenario system, unfold your own unique journey. Engage in dramatic battles, using the Hirameki system to gain new skills and carry out combined attacks with your allies.”

For those looking for something new to play now, the video presentation announced the immediate availability of Capcom Arcade Stadium, which brings 32 of Capcom’s arcade classics to the Nintendo Switch.

Featuring a “nostalgic yet completely reimagined storybook world”, the game launched on February 25 and is described as “a love-letter to the original titles and maintains the same punishing gameplay that fans have come to expect.”

A number of games are releasing on Switch this month, including battle royale first-person shooter Apex Legends on March 9; action-adventure Stubbs the Zombie in Rebel Without a Pulse on March 16; and third-person shooter Plants vs Zombies: Battle for the Neighborville Complete Edition on March 19.

Critically acclaimed rogue-like dungeon crawler Hades is getting a physical release on Switch on March 19, with extras such as a PC download code for the game’s original soundtrack, a 32-page full colour character compendium as well as the game itself.

These items were made available in Nook Shopping starting March 1, following the download of a free update on February 25.

Arriving on May 28 is World’s End Club, in which “a group of misfit students from all over Japan find themselves trapped in a strange theme park during a class trip. To unravel the mystery of their circumstances and find an escape, they must take part in a Game of Fate that will test their bonds of friendship.”

Set for release on June 4 is DC Super Hero Girls: Teen Power which sees players play as teenage super heroes Wonder Woman, Supergirl and Batgirl from the DC Super Hero Girls animated series as they fight to save Metropolis from super-villains, while also getting to freely explore the city.

The Hyrule Warriors: Age of Calamity Expansion Pass DLC was also announced, with a first wave kicking off in June with “an expanded roster, newly added weapon types, and challenging enemies” while a second wave available in November 2021 “will bring new character vignettes, added stages, an expanded roster, and new battle skills for existing characters”.

The presentation showcased a number of titles that are set for release in summer 2021, including action-adventure title Outer Wilds. “Venture into the vast reaches of space to uncover the secrets left behind by an ancient civilisation. You have 22 minutes. After that, the sun will explode and the solar system will be annihilated. However, everything will reset, allowing you to continue exploring while retaining information you gathered.

“By repeating these cycles, you’ll gradually unravel the mysteries hidden in the universe.”

Samurai Warriors 5, the latest entry in the Samurai Warriors franchise, is also coming to the Switch in summer 2021, and will see players dive into the history of the Sengoku period, centred on a story that focusses on military commanders Nobunaga Oda and Mitsuhide Akechi.

The Direct concluded with the announcement of Nintendo’s multi-player shooter Splatoon 3, scheduled to launch in 2022.

Speaking at the end of the presentation, Shinya Takahashi from Nintendo said, “Today, we showed you a sampling of games coming to Nintendo Switch. A variety of games are in development and we look forward to sharing more with you in the future.”