THE WASHINGTON POST – The late Palestinian American thinker Edward Said was a professor of comparative literature at Columbia University with the media profile of a European movie star. A multilingual, dashing scholar known for leading theoretical seminars in Savile Row suits, Said was also a tireless advocate for Palestinian rights and a frequent guest on television roundtables until his death at 67 from leukemia in 2003. His celebrity defied the image of a stuffy Ivy League professor, but it was his politics that first shattered the manicured boundaries of Western academia.

With 1978’s Orientalism, Said challenged the foundations of modern “culture” by demonstrating how even the most celebrated of European artists and writers reflected the racism and politics of imperialism. For a child of Empire – raised in British Cairo – the writing was personal. Images, representations and narratives of the “backward” East had helped justify centuries of colonial conquest and exploitation in the Middle East, Africa and South Asia. In Said’s formulation, the arts were an essential part of that process. Europe’s worst impulses were powered by “good” art. Joseph Conrad, EM Forster and Verdi became case studies in how artists participated in and normalised the idea of the uncivilised and inferior “East.”

With writings that integrated literary theory and colonial history into radical new ways of seeing, Said opened the doors for a new generation of non-White academics and postcolonial consciousness. In Said’s shadow, the Empire could write back.

Almost 20 years after his death, one of Said’s former students, Timothy Brennan, has written an expansive new biography of Said’s life and ideas. Beginning with his itinerant childhood as the son of wealthy Palestinian immigrants in Cairo and covering his studies under literary giants at Princeton and Harvard University, the book explores the full spectrum of the (almost exclusively male) sources that shaped Said’s ideas. From the American critics Said admired to the French theorists he deconstructed and the Arab philosophers he wished were better represented in Western syllabi, Places of Mind traverses some rather dense territory. Brennan presents the scholarly Said as a dazzling processing power operating at warp speed, a mind capable of metabolizing, reorienting and rendering theory with technological precision. 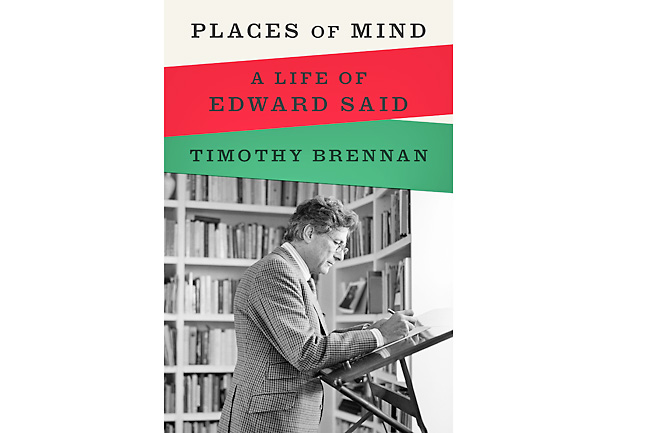 I still have my own tattered copy of Orientalism from multiple undergraduate courses that assigned it as required reading. While some ideas were too esoteric to remember accurately into adulthood, I certainly never forgot the book’s unusual cover. It’s a painting Said chose for the occasion, a classically grand and seductive Orientalist tableau bathed in topaz blues and Arabic calligraphy.

A young boy stands before a lounging crowd of turbaned men leaning against a mosque’s interior wall. He is wrapped by a snake reaching for the skies.

The image is the epitome of the reductive and redundant tropes Said explores in the text, the “East” not simply as the terrain of militarised despots but also as a depraved counterpoint to European values. I hear echoes of Said’s alertness to image-making and representations in the contemporary debates over identity, gaze and historical reckonings – the very ideas informing the culture wars playing out on campuses, in newsrooms and at award shows over minority representations and majority gatekeepers.

But in the passing of time, the celebrity cult of Said has often blurred the nuances of his arguments. In reading Brennan, I found myself asking not only what Said thought, but to what end? One of the strengths of the book’s exhausting focus on intellectual production and academic theory is to underscore that Said was never a polemicist with easy positions. His approach to criticism was built on the idea that rigorous, comparative analysis was at the heart of interpretation and original knowledge production. As Brennan explains, “he revived an older ethics of reading based on fidelity to what books say in their own place and time, part of his lifelong argument that what happened in the past is not hopelessly ambiguous but can be recovered through the work of interpretation.”

Just as Said wrote on Israeli occupation and the caricatures of Arabs and Muslims in mainstream media, he also warned against the temptations of retaliatory thinking. He criticised the emerging politics of nationalism, Islamism and tribalism in the Middle East that often resorted to their own reactionary caricatures of the West. In an essay called The Politics of Knowledge, he distanced himself from the politics of victimhood and identity. “Victimhood, alas, does not guarantee or necessarily enable an enhanced sense of humanity. To testify to a history of oppression is necessary, but it is not sufficient unless that history is redirected into intellectual process and universalised to include all sufferers.” Said was a critic, first and foremost.

What’s missing across Places of Mind however, is the sheer joy of inquiry and volcanic passions Said brought to his own writing. With perfectly delivered witticisms, he infused inanimate concepts with such verve and style that to this day his books, lectures and interview transcripts seem to pulsate out from the page.