WASHINGTON (AFP) – NASA successfully flew its mini helicopter Ingenuity on Mars early Monday, the first powered flight on another planet and a feat the agency likened to “our Wright brothers moment”.

The 1.8 kilogramme rotorcraft lifted off at 3.34am Eastern Time, rose to a height of three metres, swiveled its tissue-box sized body, swayed in a gentle Martian breeze and then touched down after 39.1 seconds.

Data and images from the flight were transmitted 278 million kilometres back to Earth where they were received by NASA’s array of ground antennas and processed almost three-and-a-half hours later.

Engineers in orange polo shirts were glued to their screens at the Jet Propulsion Laboratory in California, where the mission had been planned for the past six years. They broke into cheers as one of them read off a checklist of manoeuvres Ingenuity had successfully executed, and concluded: “Ingenuity has performed its first flight – the first flight of a powered aircraft on another planet.”

The aircraft quickly sent back a grayscale image from its downward pointing navigation camera, showing its bug-like shadow cast on the surface. 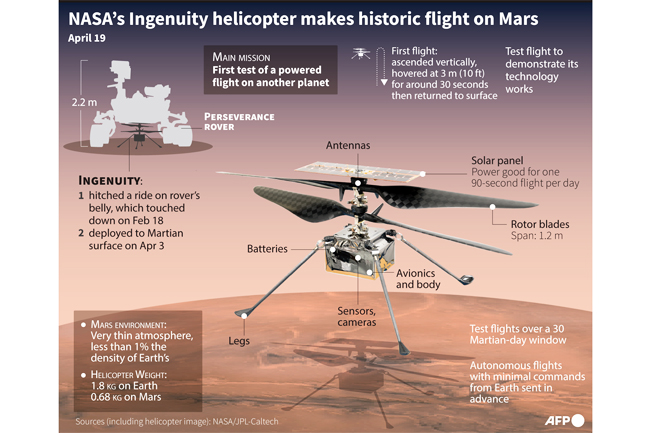 Then came a choppy colour video from the Perseverance rover showing Ingenuity on the ground, in flight, and once more at rest. A smoother version followed a few hours later.

“We’ve been talking so long about our Wright brothers moment on Mars, and here it is,” said Ingenuity project manager MiMi Aung to her team, ripping up her contingency plan. The first powered flight on Earth was achieved by the Wright brothers on the sand dunes of the Outer Banks in North Carolina in 1903, ushering in the era of aviation.

A swatch of fabric from that plane has been wrapped around a cable under Ingenuity’s solar panel in honour of the feat.

Chief engineer for the Ingenuity, Bob Balaram told reporters the helicopter was in fine fettle following the maiden run.

“She’s even healthier than she was before this flight – she shook off some of her dust that had been covering the solar panels, and is in fact producing even more solar energy than before.”

NASA had originally planned the flight for April 11 but postponed it over a software glitch that was identified during a planned high-speed test of the aircraft’s rotors.

The issue was later resolved through a coding tweak.

Ingenuity travelled to Mars tucked under the belly of the Perseverance rover, which landed on the Red Planet on February 18 on a mission to search for signs of past microbial life.

Ingenuity’s goal, by contrast, is to prove its technology works. It is hoped that one day, future aircraft can revolutionise exploration of celestial bodies by going further and faster than rovers, and reaching areas hard to access by land.

NASA is already preparing to send Dragonfly, a much larger rotorcraft-lander, to Saturn’s icy moon Titan where it will fly multiple sorties in search of extraterrestrial life when it reaches in 2034. Ingenuity’s flight was challenging because of conditions vastly different from Earth’s – foremost among them a rarefied atmosphere that has less than one percent the density of our own.

This means that Ingenuity’s rotors, which span 1.2 metres, have to spin at 2,400 revolutions per minute to achieve lift – about five times more than a helicopter on Earth.

Because of the distance from Earth, it can’t be piloted by a human. While its main manoeuvres are pre-programmed, Ingenuity needs to make some real time decisions using data from its sensors and camera. It also needs to run a heater to survive nighttime temperatures that plunge to minus 90 degrees Celsius.

Ingenuity was dropped off at its “flight strip” on April 3 and is now in the 16th sol, or Martian day, of its 30-sol (31-Earth day) flight test window.

The team will continue to receive and analyse data, then formulate a plan for the second flight targetted for April 22.

Though the clock is ticking, Aung said she was still hoping to carry out Ingenuity’s total of five increasingly challenging flights that will push the craft higher, further, and faster.

Asked by a reporter what Ingenuity’s fate would ultimately be, Aung said that learning what the aircraft can and cannot withstand was a key part of the mission, and hinted the team might crash it on purpose. “We really want to know what the limits are, so we will be pushing the limits.”