AP – Sport is the forum where it cannot be hidden, where the feelings that are pulsing through someone’s core at a particular moment – be it good or bad, joy or pain, exhilaration or anguish, relief or regret – can be captured in a single image.

It was there with Lionel Messi, maybe the greatest football player of all time, finally hoisting the World Cup trophy for Argentina. The euphoria, unmistakable.

It was there with Mikaela Shiffrin of the United States (US), maybe the greatest women’s skier of all time, sitting on the side of the course at the Beijing Olympics after skiing out in the first run of the slalom race, hiding her face from the world. The disappointment, unmistakable.

Everyone knew what they felt in those moments.

Sometimes, it works the other way. The image makes the viewer feel something as well.

Like a shot of someone from Team Ukraine competing in artistic swimming at the world championships in Hungary, droplets of water splaying every which way off her body while she competes for a war-torn country. You could feel the pride. 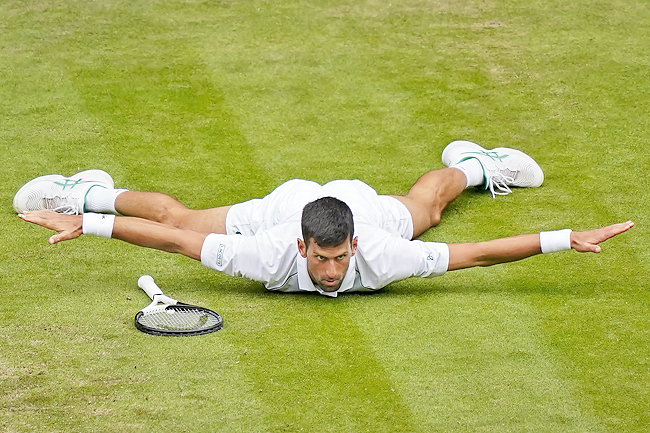 Or a shot of two men on the ground, trying to protect themselves from a rampaging bull in Mexico City. You could feel the fear.

Capturing the moment takes no more than a sliver of a second, though the image lives forever. And many from 2022 were simply iconic. Serena Williams in the spotlight at the US Open, presumably for the final time.

Roger Federer, Rafael Nadal and Novak Djokovic all holding back emotion in the same image at the Laver Cup, Federer’s final event before retirement, the enormity of that moment was not lost on any of them as they realised that the greatest three-headed rivalry in the sport had ever seen is now over.

The picture, as the cliché says, tells 1,000 words. Sometimes, the picture is of the words as well.

“I’m a good curler. I have confidence. Let’s have fun,” Japan’s Satsuki Fujisawa wrote on her right hand, in English, during the Beijing Olympics.

The affirmation must have helped; she won silver at the Beijing Olympics, improving one spot from her bronze-medal finish at Pyeongchang four years earlier.

And many needed no additional explanation. Scottie Scheffler, hoisting his putter skyward as the warm Georgia sun shone down when he won the Masters.

College basketball’s all-time winningest coach Mike Krzyzewski sitting on a courtside stool as he led Duke to the Final Four for the final time. Anna Hall, throwing her arms skyward on her way to winning bronze in the heptathlon at the world track and field championships.

Hector Neris of the Houston Astros, leaping to celebrate his team being two innings away from closing out the Philadelphia Phillies and winning the World Series.

The moments were just that, moments. This year is gone. Next year awaits.