Photographer rides out Ian to capture the storm for others

AP – Chuck Larsen has lived on Sanibel Island for 12 years and until last week had never experienced a major hurricane. The 76-year-old who moved from California decided to ride out Hurricane Ian in his condominium with little idea of the horror he was about to go through.

He filled his bathtub with water, stocked up on food and water, and made sure batteries were charged and his windows were rated to withstand 240 kilometres per hour winds. He followed the forecast thinking the island would get strong wind and rain, and trees would fall, but areas to the north would take the hardest hit.

“I have to tell you, I felt fairly safe going into this, but when the glass blew out and started shattering inside … I realised this was a problem,” said Larsen, who has since “retreated to Orlando”.

There was another reason Larsen wanted to stay. He is the part owner and photographer for the local news website santivachronicle.com.

“I stayed behind to record the event and record the aftermath for publication without realising exactly how bad this storm was going to be,” Larsen said in a Zoom interview. “I tried to photograph the storm as it was happening. The high winds, the rain, the surge from the Gulf. After the storm I tried to document what was left, what damage was done, and it was horrific.” 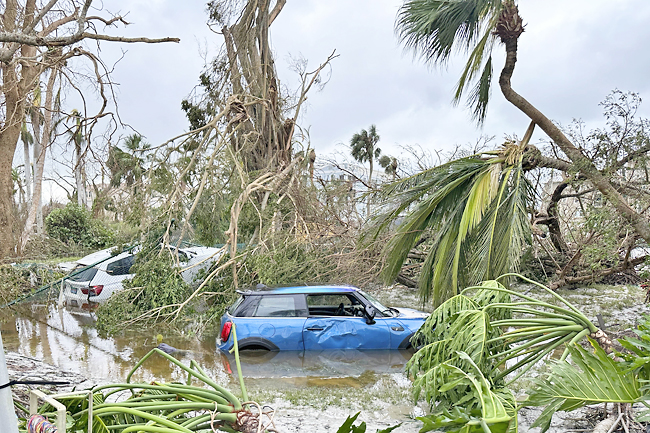 But with no Internet or mobile phone connectivity, he wasn’t able to publish any material until several days later when he was safely evacuated.

Larsen has spent a career in television and continues to run a television distribution consulting company. His first television job was as a reporter and anchor at an Indianapolis station. One of his co-workers was weatherman David Letterman.

Larsen was attracted to Sanibel because of its old Florida charm and the community of residents who want to preserve it. The barrier island off Fort Myers has no buildings taller than three stories, no chain restaurants or stores, no traffic lights and is home to locally owned shops. It’s famous for the thousands of shells that wash up on the beaches and is a quaint, picturesque island for tourists.

He and his wife vacationed there a few years before deciding to move to the island of about 6,500 full-time residents. Sanibel attracts retirees – about 57 per cent of the population is 65 years old or older – and while not an enclave for the mega-rich, the median value of owner-occupied homes tops USD700,000 and its per capita income is more than USD90,000, both well above state averages.

“At the moment, it looks like nothing you would remember if you had ever visited Sanibel.

While he, his wife and two dogs took shelter in an interior room during the storm, he ventured out the next morning with his camera hoping to get images for his news website, which covers community events, human interest stories and features on residents of Sanibel and nearby Captiva Island.

“It was like living in a war zone – just decimated property and condominiums, trees gone, I don’t think there was a car that survived. It was pretty dramatic, much worse than I’ve ever experienced,” Larsen said.

He and his wife eventually found a boat to take them to the mainland. They’re staying with a daughter in Orlando, not sure when they’ll be able to get back to their island home. But Larsen is sure they will.

“Sanibel is a very cohesive community. It will rebuild. It won’t happen immediately. It will probably happen faster than most people might think, but it will need a complete rebuild – electric grid, water systems – it’s going to take a lot of work, but it will come back. I have no doubt about that.”