To mark this occasion, the four-layered pesambah cake was especially made with symbolism in its design, layers and colours.

The bottom layer was rectangular with numbers in jawi and roman numerals symbolising Brunei Darussalam’s embrace of Islam in every aspect. It was green to symbolise the Royal Brunei Land Force (RBLF), similar in colour to its digital disruptive pattern (D2P) uniform. The RBLF is the first established unit in the RBAF and hence, served as the foundation of the cake and was larger in size. It was decorated with air mulih pattern to showcase Malay and Bruneian characteristics.

The second layer was decorated with five gold stars symbolising His Majesty’s rank and an inspiration for the RBAF. It was dark blue to symbolise the Royal Brunei Navy (RBN), similar in colour to its D2P uniform. It was represented in the second layer as it was established after the RBLF.

The third layer was light blue to symbolise the Royal Brunei Air Force (RBAirF), inspired by its walking out dress (WOD) uniform. It was the penultimate layer as the third branch established after the RBN.

The top layer of the cake was circular in shape and decorated with the RBAF 61st anniversary celebration logo.

Other than the cake, His Majesty also received three pesambah in the form of an all-terrain vehicle (ATV) in camouflage, celapa wangian as well as a set of machete, SOP tools and emergency pocket. 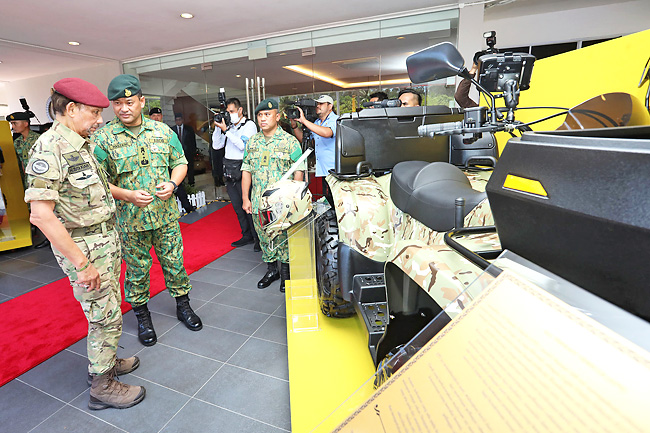 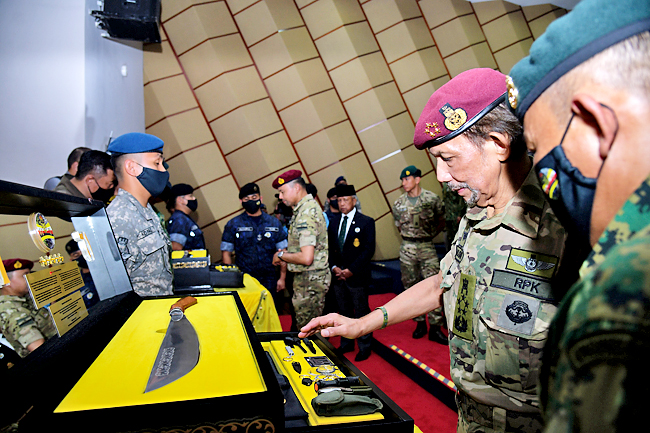 The ATV is a high-powered low-pressure vehicle, also known as a light utility vehicle (LUV), usually utilised as a robust activity vehicle. The ATV is not only used for recreational activities but also one of the latest capabilities of the RBAF. Although small, its strengths can be used in a multitude of challenges to overcome obstacles such as crossing muddy and rocky roads, traversing steep hills and is a valuable asset during operations in forests.

The camouflage pattern reflects RBAF’s identity, symbolising its bravery, agility and readiness to meet a host of challenges. The ATV’s qualities reflect the strength and perseverance a member of the military possess to face trials and tribulations and symbolises the core values of RBAF to protect and defend national sovereignty and uphold the Malay Islamic Monarchy (MIB) philosophy.

The celapa wangian comprised a celapa, a lamp and tasbih beads with oud fragrant oils. It came with five glass bottles filled with different oud oils as well as a lamp with a golden-coloured wick in fragrant oil. These elements symbolise patriotism, authority, readiness, resilience and loyalty of the RBAF.

The tasbih symbolised the RBAF’s continuous recitation of zikir in honour of Allah the Almighty and His blessings in ensuring peace and prosperity in the Sultanate.

The third pesambah was a set of machete, SOP tools and emergency pockets, with the machete symbolising strength, fortitude and uniqueness. It also signified heroism in defending and preserving the sovereignty of the monarch, religion, race and country, in line with the MIB philosophy.

The SOP kit or cutlery consisted of utensils issued to military personnel and standard equipment. It is used during operations and training reflecting the RBAF’s core values required to achieve vision and goals of the Ministry of Defence and RBAF.

The emergency pocket is a useful tool during difficult moments. The use of the modern tool illustrates RBAF’s modernity and dynamism as well as symbolising its readiness to face contemporary challenges.

All tools are made of quality material to showcase the determination and fighting spirit of RBAF to achieve Brunei Vision 2035.