Peru declares state of emergency in Lima over protests

LIMA (AFP) – Peru’s government late on Saturday declared a state of emergency in the capital Lima and three other regions due to protests against President Dina Boluarte that have claimed at least 42 lives in recent weeks.

The measure, in force for 30 days, authorises the army to intervene to maintain order and suspends several constitutional rights such as freedom of movement and assembly, according to a decree published in the official gazette.

Supporters of ousted president Pedro Castillo have marched and barricaded streets across the South American country since December, demanding new elections and the removal of Boluarte.

On Friday night, she refused to step down, saying in a televised address, “My commitment is with Peru.”

The state of emergency covers Lima, the regions of Cusco and Puno, as well as the port of Callao, adjacent to the capital. 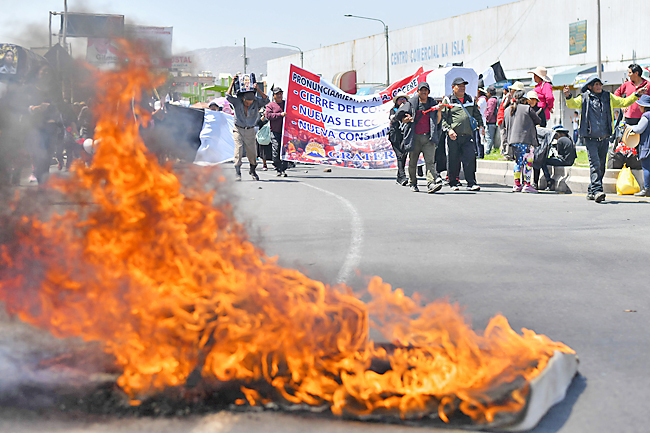 More than 100 protest roadblocks were in place across Peru on Saturday, mainly in the south, which has been the epicentre of the unrest, and also around Lima.

The airport in Cusco, gateway to the famed Machu Picchu site in southern Peru, reopened on Saturday after being shuttered over a flare-up in the protests.

Authorities on Thursday suspended operations as a protective measure at the airport, which handles the second most air traffic in the country, after demonstrators tried to reach the transportation hub.

In December, it suspended operations for five days.

The mass anti-government demonstrations first broke out in early December, after Castillo was ousted from office for attempting to dissolve Congress and rule by decree, seeking to prevent an impeachment vote against him.

Peru has faced political instability in recent years, with 60-year-old Boluarte being the sixth person to hold the presidency in five years.