THE WASHINGTON POST – It may have taken a long time to come in George R R Martin’s A Song of Ice and Fire series, but when it hits, all you want to do is curl up in bed and lock the doors against the snow zombies. Winter has long fascinated writers. In C S Lewis’ classic The Lion, the Witch and the Wardrobe the four Pevensie children must save Narnia from the evil White Witch and her eternal winter. In H P Lovecraft’s At the Mountains of Madness, an expedition to Antarctica discovers an alien city under the ice, with predictable results. You may be tempted to hibernate this season, but we’ve got a whole slew of books set in cold locations to keep you awake.

Lavie: Let me throw the first snowball here: I am going with Tove Jannson’s Moominland Midwinter (translated from the Swedish by Thomas Warburton), one of the true greats and my favourite moomin book. Moomintroll wakes up alone from hibernation to find the world transformed, and everyone he knows is gone or sleeping (apart from Little My, who will never miss the fun). If you do not cry over The Squirrel With the Marvelous Tail, you are a monster. I reread it a few weeks ago and it’s just as wonderful as ever.

Two important texts that continue to exert an influence today are Hans Christian Andersen’s 1844 fairytale The Snow Queen and John W Campbell Jr’s 1938 novella Who Goes There? From the first, we get the classic science fiction novel The Snow Queen (1980) by Joan D Vinge, a complicated tale set on a planet alternating between a long summer and a long winter, and introducing a brilliant early sort of mind-linked Internet among its many marvels. And more recently there is Thai author Benjanun Sriduangkaew’s Winterglass (2017), which lyrically recasts the snow queen story in a science fiction-fantasy context.

Campbell’s novella, of course, is better known as The Thing, which most people know from the classic John Carpenter movie. A story told from the point of view of the monster, The Things by Peter Watts, went viral in 2010 and was nominated for multiple awards. Adam Roberts’ The Thing Itself uses the base story to launch an ambitious exploration of – of all things! – Kantian philosophy, not to mention the Fermi Paradox. It is quite an achievement.

Silvia: Smilla’s Sense of Snow by Danish author Peter Hoeg is an odd, cross-genre book that somewhat reminds me of The Thing. A thriller with an evil corporation at its centre, it suddenly becomes a science fiction novel at the end, complete with a meteorite hidden in the ice. Split Tooth by Tanya Tagaq is also a cross-genre tale. Part memoir, part Inuit folklore, it is been called “magic realism”, and that is probably not an accurate label either, but it is as close as one can get to a traditional name for this narrative of a girl growing up in Nunavut. Its descriptions of the land and the natural world are enchanting. 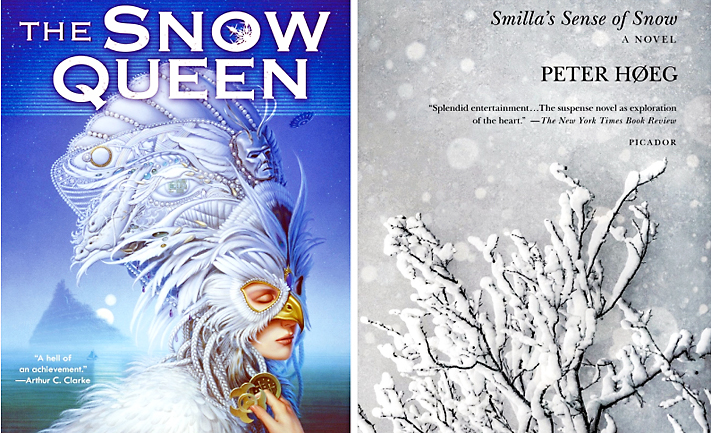 For science fiction, try Moon of the Crusted Snow by Waubgeshig Rice, the tale of an Anishinaabe community facing an apocalyptic disaster and the outsiders who intrude and endanger the isolated enclave. A few months ago, a news report of a couple from Quebec fleeing covid-19 for a small town in the Yukon made this an oddly prescient story.

For some spooky reads, I recommend Taaqtumi: An Anthology of Arctic Horror Stories edited by Aviaq Johnston. Taaqtumi is an Inuktitut word that means “in the dark”, and these tales, set in the Canadian Arctic, certainly head to dark places. It is a rare treat to see so many Indigenous writers collected in one volume, and the book comes from a small press, always a nice thing to support. My other horror recommendation is Let the Right One In, the vampire novel by John Ajvide Lindqvist. Set in Stockholm in the 1980s, it builds a grim city that feels alive and chilling and is a great read for people looking for vampires that are more gross than romantic.

Lavie: I love Smilla’s Sense of Snow with all my heart. One book to look forward to is Polish author Jacek Dukaj’s Ice, considered a classic of Polish science fiction and forthcoming in an English translation. It is an alternate history where World War I never happened, Poland is still under Russian rule, and a mysterious alien Ice and its life-forms are slowly overtaking Europe. And finally, I would be remiss if I did not recommend something by Russian author Ekaterina Sedia, including her classic The Secret History of Moscow and short story collection Moscow but Dreaming. She is a wonderful writer – and her books are perfect for a chilly  night’s read.