DPMM FC Head Coach Adrian Pennock praised the work ethic of the players and the good atmosphere within the squad ahead of the much-anticipated Singapore Premier League season next month.

“The work ethic of the players is absolutely fantastic. I cannot complain at all,” Pennock told the Bulletin in an interview after a warm-up match against Kasuka FC on Tuesday.

The players have responded well to their training regime which not only focussed on improving their physical fitness but also their nutritional needs.

Pennock added, “They have been working so hard and have been absolutely fantastic. Everyday, they came in and were always smiling. It’s a very good atmosphere in the changing room.”

All three foreign imports – Charlie Clough, Blake Ricciuto and Andrey Varankow – have been with the squad for most of pre-season training and have immersed in their new environment.

“The three overseas players have gelled very well with the local players. They are all very well-liked,” said the former Stoke City first team coach.

The Gegar-Gegar men are in their final weeks of preparations before they begin their campaign against Home United at the Bishan Stadium in Singapore on March 3.

Pennock concluded, “We still got a couple of weeks to go before the start of the season. There is still a little bit of work to be done but we are going in the right way.” 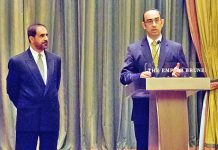