THE WASHINGTON POST – Cat urine is particularly difficult to deal with – worse, even, than dog urine, according to senior trainer for Learn to Restore (learntorestore.com) Jessika James, offering classes for cleaning professionals that are sanctioned by the Institute of Inspection, Cleaning and Restoration Certification (IICRC). She is also a past board member of IICRC, the industry’s standards-setting organisation.

HOW DO I REMOVE CAT URINE FROM CARPET?

The reason cat urine is so confounding: It contains hormones and pheromones in addition to urea, uric acid and more.

On hard surfaces, it’s easy enough to wipe away the urine. On carpets or porous surfaces, it makes sense to blot up as much liquid as you can as soon as possible, but even if you work quickly, enough urine will probably remain to trigger a process that can result in smells from the same family of chemicals that makes skunks stink. According to the Office for Science and Society at McGill University, bacteria grow in cat urine that isn’t cleaned up promptly, which releases an ammonia smell. Further decomposition emits mercaptans, which are sulfur-containing molecules found in skunk spray, rotting meat and other obnoxious things.

The most effective way to keep cat urine from stinking up a home is to use an enzyme cleaner. The enzymes speed up decomposition and break the urea into carbon dioxide and ammonia, which evaporate quickly, preventing the reactions that can lead to skunk-type smells. These cleaners include Urine Away stain and odour eliminator and Nature’s Miracle advanced stain and odour eliminator.

But there are a few caveats about using these products. 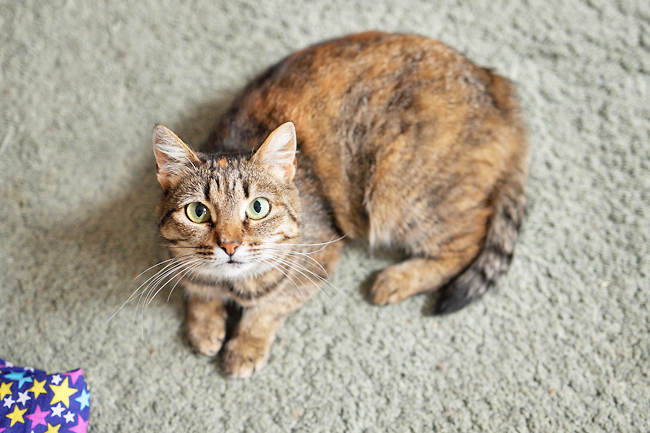 First, James said, even if the label says it’s both an odour eliminator and a stain remover, it usually isn’t, because the two types of chemistry are incompatible. Enzymes prevent smells but don’t remove stains. Stain removers tend to be oxidisers, using cleaning agents such as hydrogen peroxide. “They eat each other,” James said.

Start by fighting the odour, then the stain. It’s important to begin with an enzyme cleaner, not a carpet shampoo, James said, because detergents can leave a residue that can interfere with the enzyme’s efficiency. Urine Away’s label says it works even if soaps and detergents have been applied, but using soap first doesn’t make the urine easier to clean up, so why risk it? Nature’s Miracle warns that using other cleaners and detergents first may chemically “set” stains that will then be impossible to remove.

Also, read the label for surfaces where the enzyme cleaner should not be applied. These typically include bare wood, leather, suede, silk or wool specialty fabrics. Labels often suggest testing a small patch of carpet in an out-of-the-way location first to ensure the colour isn’t affected. James said this is a particular issue with nylon carpet, which is more prone to losing colour and becoming stained than other carpet fibres.

For an enzyme cleaner to work, it needs to saturate the fibres and penetrate as deeply as the urine did. Don’t just spray or sprinkle it on lightly; pour it on. If the urine soaked into the pad, that needs to be soaked with the cleaner, too.

The enzymes help turn the urea into gases that evaporate quickly, but they don’t remove the other ingredients in cat urine, which often leaves patches of the carpet sticky, James said. When people walk over the carpet after it’s dried, the carpet appears to become stained, but the “stain” is just grime, she said.

To prevent this, the area needs to be thoroughly rinsed with clean water after the enzymes have worked, James said. For homeowners trying to treat pet accidents on their own, the best way is to sponge on clean water, then blot it out by spreading a clean, dry towel over the area and pressing down. Rotate the towel as needed. Do not rub back and forth, because this might make the fibres fuzzy or pilled.

For the best results, James said, call in a professional carpet cleaner with equipment that can flush the carpet with water, then extract the moisture, so the carpet isn’t left soggy.

Professionals can also give advice about removing stains or grime left by home treatments of cat urine.

If your efforts to combat the smells don’t seem to be working, it’s possible you haven’t found all of the urine deposits. Cats, especially males, like to mark territory and may leave urine in out-of-the-way places. Try looking when the room is dark, and use a flashlight with nine to 12 bulbs that produce ultraviolet light, such as the UV Stain Detective LED black light. The light will make dried urine glow in the dark, so you know which areas to treat.

If that doesn’t work, or if your cat seems to be returning to the same area, you might need to pull up part of the carpet, replace the pad and seal the subfloor with shellac. In extreme cases, part of the subfloor may need to be replaced.