TAWERGHA, LIBYA (AFP) – In front of a bundle of palm fronds, Halima Mohamad squats down to weave in an abandoned school in Tawergha, a town once a flashpoint in Libya’s decade-long war.

Halima uses the date palm leaves to weave baskets, using traditional skills handed down over the generations – reconnecting her to a way of life nearly destroyed by the chaos of conflict.

“We must preserve this heritage inherited from our ancestors,” said 55-year-old Mohamad. “It’s our identity.”

The mother of two spends an average of 16 hours a day in the room that serves as her workshop, plaiting the fronds into baskets, trays, floor mats and wall decorations.

The town has suffered; when Libyan Dictator Moamer Kadhafi was toppled in 2011 in a NATO-backed uprising, people took revenge on those seen as his supporters – including the entire town of Tawergha. 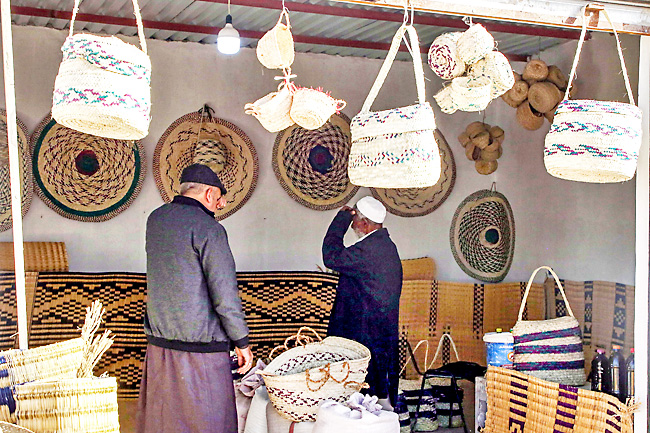 It’s 40,000 residents, many the descendants of slaves, were forced to flee, with militia forces torching homes and destroying buildings.

Residents like Halima ran for their lives – barely surviving for seven years in hard-scrabble dusty camps scattered across the country, and forbidden to return home.

The oil-rich North African nation has been riven by civil war ever since the fall of Kadhafi, but rival sides finally agreed a fragile ceasefire last October.

Under a separate deal struck in June 2018 with the backing of the United Nations-recognised (UN) Government of National Accord (GNA), residents of Tawergha began to slowly come back.

Around a third of the original population of the town have returned, though the scars of war remain, with houses riddled with bullet holes and craters left by artillery fire.

For some, the town’s ancient tradition of weaving offers a way to earn an income – as well as resuming a way of life that the war had stopped.

For Halima, her primary motivation is money. “I work long hours because the income is decent,” she said.

As she sits knotting the long thin leaves together, the fresh scent brings back memories of her childhood. She follows the repetitive handwork in moves learnt from her elders, and colours the strands with three traditional dyes – blue, green and purple – to add splashes of design.

“We use special dyes,” she said. “We fill large barrels in which we boil the palm leaves until they soak up the colours.”

As her fingers twist and tie the thin stems, she explained how her relatives had taught her to select supple strands and to then “dry them in the sun for several days.”

Then the leaves are “soaked in water to soften them” before the weaving work can even begin, she added.

“My father and my sisters have been working in basketry for almost 50 years, and I started doing it 20 years ago,” she said.

A workshop run by a local group and supported by the International Organization for Migration (IOM) brought in experts to help perfect the weaving techniques.

There is no shortage of raw material, with thousands of date trees dotted all around.

“In the past there was a famous Monday market, where artisans traded handicrafts, crockery and woven textiles,” said Head of a handicrafts association in Tawergha Faraj Abdallah.

But the weavers still struggle, competing against modern goods and cheaper imports from neighbouring Algeria, Egypt and Tunisia, while weavers say there is no export strategy.

“The authorities must allow exports to allow this craft to prosper,” said owner of a basket shop in Tawergha Mahmud Khairi.