For some, cats might just be another household pet, but for a few with keen eyes and attention to care, cats can also help open new paths to mental well-being, and also be a new addition to the family.

These shared philosophies could be seen in full force among the many cat owners who proudly showcased the cats that they had put their love and care into as part of the Cat Competition held in the Belait District recently.

With various categories highlighting the different and popular species of cats such as Persian, Siamese, and other mixed breeds as well as the care and attention by the owners to bring forth each cat’s strong points such as being the healthiest, the one with most beautiful fur and more, the competition aimed to emphasise the many key features and characteristics of cats found in the nation.

Amidst the fluffiness and cuteness exhibited by the various cat species on display during the competition, I spoke to some cat owners being showcased that day.

She explained how she started caring for Wickey late last year, and said that since then the cat has become a part of her family. 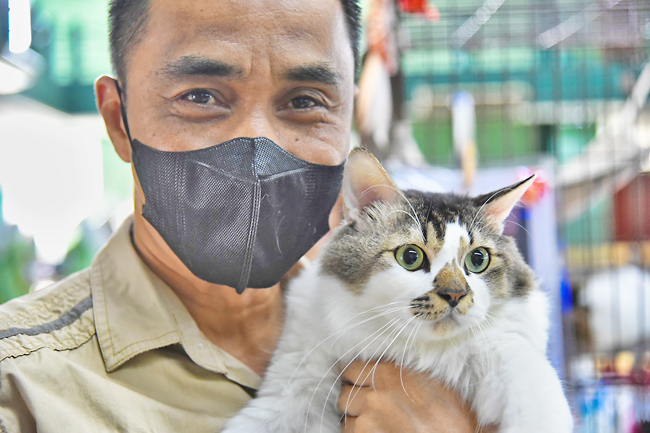 “The challenge mainly relates to caring for the thick fur, which needs proper nutrients and supplements as well as trimming it once every few months,” she said.

From the perspective of a new cat owner, as Wickey was her first cat, she added that all of this was a new experience for her, and highlighted that she finds joy in having Wickey as part of her family.

In addition, she was delighted that many like-minded people had gathered at such a competition to showcase the care for their cats as well as appreciate others who had done the same for their cats.

“Coming here has been a fun experience in seeing other cats, and to have our cat be one of the winners in the competition helps us to appreciate the beauty and charms of our cat.”

Meanwhile, Mohamad Hafizan Sitedi is an owner of many cats, one of which is a Cornish Rex named Cherry.

He shared how taking care of a cat requires determination and utmost care. “It is important to learn about the cat’s behaviour as well as their needs, and there are many groups as well as agencies across the nation that can help with that.”

Another to comment was cat lover and frequent volunteer Md Yunos bin Haji Pungut, who spoke about his affection toward cats, sharing how he helps stray cats in addition to taking care of his own.

“There is much satisfaction that can come from taking care of cats, from being at ease to being able to find other like-minded people to share this passion with, as well as the sharing of knowledge on the best practices and grooming in taking care of cats.”

Having looked after many cats, with some also receiving various awards and accolades in many categories, one advice that Md Yunos has for people is to be on the lookout for cats that are in need, especially those which are of the stray variety.

“Even if it’s just one or two, there are benefits of them being a part of the family, from providing a piece of mind, release tensions, as well as the rezeki of helping those in need.”

This continued drive was also part of the reason why he has continued to help and care for stray cats across the district, such as by feeding them to prevent them from going hungry, adopting the stray cats and housetraining them to eventually having them be put up for adoption to a loving family.

He also added that while he currently has 16 cats, he used to have as many as 25 cats, with many having been housetrained and having since been adopted as part of a member into a family caring for cats. Md Yunos’ efforts have not gone unnoticed and have gained admiration from many cat lovers as well as groups.

The Women’s Institute of Brunei Darussalam (WI) Belait District Branch being one of many acknowledged his efforts by handing a medal in honour of Md Yunos for his effort in going out of his way to help stray cats.

With a variety of cat species found in the nation as well as across the world, competitions and showcases such as the recent one serve to highlight the various specialities of cats, as well as the efforts made by their owners to highlight these traits to their fullest extent.