GENEVA (AFP) – Europe passed the grim milestone of one million coronavirus deaths on Monday, as the World Health Organization (WHO) warned that infections are rising exponentially despite widespread efforts aimed at stopping them.

The death toll across Europe’s 52 countries, compiled by AFP from official sources, totalled at least 1,000,288. “We are in a critical point of the pandemic right now,” said the WHO’s technical lead on Covid-19 Maria Van Kerkhove,

“The trajectory of this pandemic is growing… exponentially. This is not the situation we want to be in 16 months into a pandemic, when we have proven control measures,” she told reporters.

The coronavirus has already killed more than 2.9 million people and infected nearly 136 million across the world. But despite the sombre news in Europe – the world’s worst-hit region – Britain eased curbs for the first time in months on Monday, allowing Britons to enjoy a taste of freedom.

In Britain, despite one of the world’s highest Covid-19 death tolls, there were glimmers of hope on Monday as restaurants were allowed to serve people outside – a move welcomed by the hard-hit hospitality sector, despite wintry temperatures.

“It’ll be great to see everybody again and see all the locals,” Louise Porter, landlady of The Crown Inn in Askrigg, northern England, told AFP. 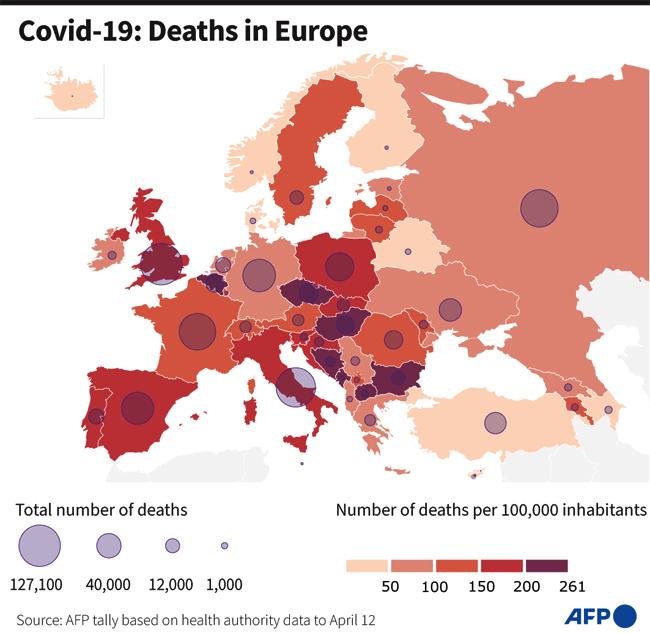 “Our lives have just been turned upside down, just like everybody else’s,” she said, adding: “We’re still here to tell the tale.”

England’s hairdressers, indoor gyms and swimming pools also got the green light to re-open. Once the worst-affected country in Europe, Britain launched a successful vaccination campaign coupled with lockdown measures that cut deaths by 95 per cent and cases by 90 per cent from January.

Italy has also been one of Europe’s hardest-hit countries, and on Monday, Rome saw the latest in a series of anti-lockdown demonstrations, with several hundred people turning out in protest against weeks of restaurant closures.

In France, now the European country with the most infections, an expansion of the vaccine rollout has buoyed optimism among lockdown-weary residents.

Everyone aged over 55 is now eligible for a Covid vaccination.