AMMAN (AFP) – Omar’s heart sinks when he trudges past his closed school gates in the Jordanian capital Amman – now part of his trip to work, to repair and clean kerosene heaters.

The 14-year-old, who dreams of becoming a pilot, is one of many minors experts said have been forced prematurely into the labour market.

Schools throughout Jordan have been closed for nearly a year now, and the economic fallout from the novel coronavirus pandemic has eaten into breadwinners’ ability to feed their families.

“As school is shut, I help my family financially,” said Omar, sporting a sweater and dirty jeans as he cleaned a heater with his blackened hands.

He works exhausting 12-hour days at the workshop, and collapses into bed after a shower and a quick evening meal. 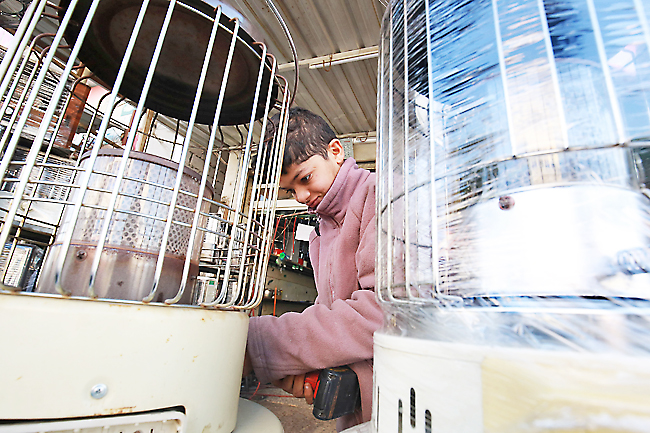 Overall, the work “doesn’t bother me”, he said.

“What is unbearable is the smell of kerosene… (it) doesn’t go away.”

He earns three dinar a day, which helps pay the family’s monthly rent of 130 dinar. His contribution is vital because his father, a day labourer, has struggled to find work due to the coronavirus downturn.

But Omar has not given up hope, and said he was determined to return to school as soon as possible.

“I would love to continue my studies” and eventually become a pilot, he said. “I don’t want the coronavirus to destroy my dream.”

The Education Ministry has announced a return to classes next month for kindergarten and some elementary school levels, as well for students in their final year of high school. Everyone else will have to wait until March.

The United Nations (UN) children’s agency, the UN Children’s Fund (UNICEF) said that while it had no hard statistics, it believed many Jordanian children had been forced into precarious work since the pandemic began – despite it being forbidden to employ those under 16.

Some 76,000 children were already working in Jordan according to the last official count, published in 2016.

“When we see children and when we speak to people, we are concerned that the numbers are increasing,” said UNICEF’s country representative in Jordan Tanya Chapuisat.

“It would seem logical… because we know the levels of poverty are increasing” during the coronavirus crisis, she added.

The official poverty rate in Jordan was 15.7 per cent last autumn, but the World Bank has warned this will increase by 11 percentage points over “the short term”.

He pointed to both the rise in poverty and the pandemic’s negative impact on Jordan’s education system as drivers of this trend.

Khader Abu Zaid has rented out hand-drawn carts at a market in the densely populated neighbourhood of Wahdat for the last quarter of a century, but admitted he had seen a surge in underage clients.

“Since the schools closed… the number of children renting my carts has increased,” the 58-year-old said. “Nowadays, it is only kids between the ages of 12 and 17 who load goods at the market.”

Their daily wage is about IQD5 or a little more, he said.

Twelve-year-old Mustafa, pushing along a brimming cart, said he has been transporting vegetables and chickens to the market for several months.

“I rent the cart for one dinar per day and I give the other four dinar to my family to help with the expenses,” he said.

Experts said a decline in the quality and accessibility of education in Jordan is also harming children’s futures.

UNICEF estimates less than a third of schoolchildren in the country have Internet access, making it impossible for the bulk of pupils to follow online classes during the pandemic.

She said many have only one smartphone, which the main breadwinner generally takes to work.

On top of that, parents often have a low level of education themselves.

“Consequently, they cannot help their children learn,” she said.