KUALA LUMPUR (XINHUA) – When most animals in the Zoo Negara Malaysia on the outskirt of Kuala Lumpur are still asleep early in the morning, the pantry at the Giant Panda Conservation Centre (GPCC) already lights up. Panda caretaker Akmal Hadi Samsuddin has started his workday by preparing breakfast for the panda family.

Fresh bamboo is the staple food while apples, pears and bamboo shoots are washed, weighed and cut into pieces to put on plate. There are also panda “cakes” made of eggs, soybeans, corn, rice, sugar, salt, calcium powder and corn oil.

“We usually taste the cakes before putting them in the oven,” Akmal said, adding that they need to make six meals every day for the panda family, including the dad Xing Xing, the mum Liang Liang, and their two daughters Yi Yi and Sheng Yi.

Daily routines for the caretakers also include cleaning pandas’ rooms, checking their bodies, training and bringing them to meet visitors, and maintaining the conservation centre, which usually last until the pandas’ last meal at 9pm.

However, Akmal, nicknamed “Panda’s Nanny Daddy” on social media, found joy in the busy work. “We don’t take it as a job. As soon as we see pandas, we cheer up because it’s a responsibility to take care of them,” he said. 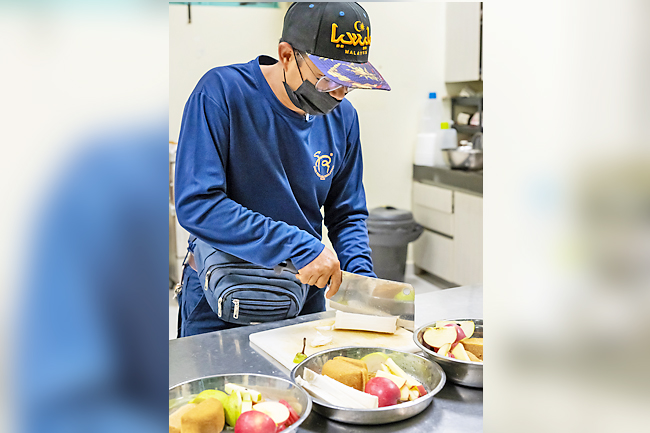 Akmal has been taking care of pandas since Xing Xing and Liang Liang came to Malaysia from China in 2014.

To ensure that Xing Xing and Liang Liang adapt well to a new life here, Zoo Negara Malaysia not only assigned Akmal to Sichuan, China to learn how to take care of them in advance, but also sent several types of local bamboo to China to see which ones the pandas like. “They (pandas) mainly feed on five types of Malaysian bamboo,” Akmal told Xinhua, noting that selecting fresh bamboo is important to make sure the pandas eat well. The caretaker team needs to spend around three days every week travelling to other states to harvest bamboo.

“There is grass everywhere, with a lot of mosquitoes, even snakes around (in the bamboo forest). It’s dangerous,” Akmal said.

“But we are willing to do it because for us it’s like harvesting for our kids.”

With good food, the way of feeding them is also important.

“Look, this is Nuan Nuan,” Akmal pointed to one of the pictures of giant pandas on the refrigerator in the pantry. When Nuan Nuan was born, Akmal said he was like a novice dad, feeling a frisson of excitement while worrying if he could give impeccable care to the panda cub and the mother.

Fortunately, the expert from China was experienced. With the joint efforts of Chinese and Malaysian caretakers, the first cub born in Malaysia grew up healthily.

Recalling the time when Nuan Nuan went back to China in 2017, Akmal said, “Sometimes early in the morning we still call her name, Nuan Nuan, Nuan Nuan, then only realised she had gone back.”

Yi Yi and Sheng Yi were born in the following years. Akmal and his colleagues were very proud because they thought it was the biggest compliment for them. A Chinese netizen left a message under the photo of Akmal and the panda cub, “Nanny Daddy Akmal has a big smile of happiness and satisfaction.”

After taking care of the pandas for such a long time, Akmal knows the characteristics and appearances of each panda quite well.

“Nuan Nuan is quiet and gets along well with keepers. There is a line near her nose. Yi Yi is like a princess, sometimes acting cute. She has a round face like her father. Sheng Yi is lively and naughty with a long nose like her mother”, Akmal said with great familiarity as if talking about his own children.

“I think pandas have been a part of my life. I spend more than eight hours a day with them. They are like half of my family,” Akmal said.

“For example, if I’m off for two-three days, I’ll miss the pandas. We take care of the pandas like taking care of our own kids.”

August 23 was the birthday of Xing Xing and Liang Liang. The zoo, with panda fans, threw a party for them. Looking at the four pandas in Malaysia, Akmal missed Nuan Nuan a lot.

He told journalists that August 18 was Nuan Nuan’s seventh birthday. On that day, he made a video call with keepers in Nanjing and wished Nuan Nuan a happy birthday. “I hope to go to Nanjing for her birthday next year.”