ISLAMABAD (AP) – Police in Pakistan arrested early yesterday a senior leader of former prime minister Imran Khan’s party on charges of threatening the chief of the elections overseeing body and other government officials.

The arrest of Fawad Chaudhry, an outspoken critic of the government, is a major setback for his party, Pakistan Tehreek-e-Insaf, in which he serves as vice president. The party quickly condemned the arrest and demanded his release.

Khan also denounced the arrest, claiming on Twitter that it left no doubt that Pakistan has become a place “devoid of rule of law”.

He urged followers to “stand up for our fundamental rights” to prevent the country from drifting toward “a point of no return”.

The arrest took place during a predawn raid at Chaudhry’s house in Lahore, the capital of eastern Punjab province, his family said. 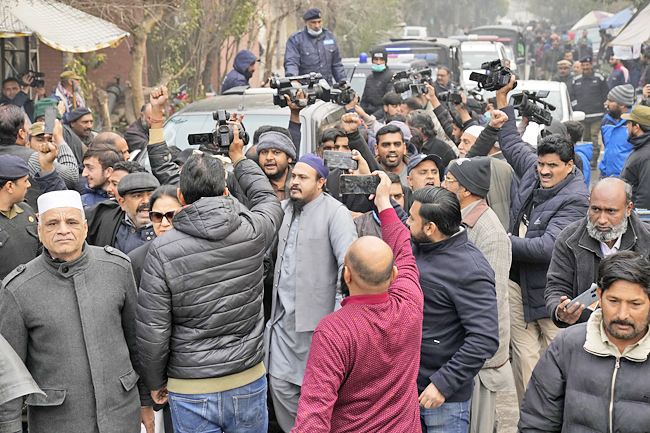 A spokesperson for Khan’s party Shireen Mazari said Chaudhry was taken in handcuffs straight to court by police in Lahore.

Chaudhry’s wife, Hiba Fawad, told reporters that security forces were rough with her husband, pushed him into a vehicle and whisked him away.

“There is a procedure to follow if you want to arrest someone,” she said.

“It cannot happen that 10 or 12 people enter a house, detain someone, throw him into a vehicle and take him away without telling the family where are they taking him.”

Footage released later by the party showed Chaudhry’s supporters gathered at the court and throwing rose petals at him as police led him toward a courtroom.

Angered over his arrest, hundreds of Chaudhry’s supporters blocked a key highway in Jehlum, his home city in Punjab province, to demand his release.

In a statement, Islamabad police said Chaudhry was arrested on a complaint from the Election Commission of Pakistan on charges of threatening the head of the elections overseeing body, Sikandar Sultan Raja, and other officials.

The threats were meant to prevent them from performing their duties and incite people to violence against them, police said.