ANN/DAWN – The founders of Dastaangoi, Amad Mian and Waliya Ahmad, began planning this tour in March after they hosted an art residency and saw Mustafa Mohsin, a plein air artist from Lahore who studied at the Florence Academy of the Arts, working around.

“That’s when me, Waliya and Mustafa began thinking along the lines of hosting a plein air art tour in Pakistan because we thought we have such beautiful mountains up north and it would be great to show them to artists and the world,” Mian told Images.

Their inspiration was driven from the fact that plein air art is being done in Switzerland, the south of France and other places, so why is Pakistan not a part of the plein art circuit when it has some of the most beautiful landscapes and mountains that exist today?

What’s interesting is that it didn’t take a lot of marketing to pull this off. Mian and Ahmad only used Instagram and posted the itinerary there. They reached out to some international plein air artists who were kind and shared it and that’s how the word got around.

The tour had a strict selection process and Mian made it a point to speak to everyone coming on the tour beforehand to make sure that they are empathetic and can get along.

“You might remember the paintings and the people but you definitely remember the experience. I wanted to make sure people coming from abroad go back with a really cool experience in Pakistan.” 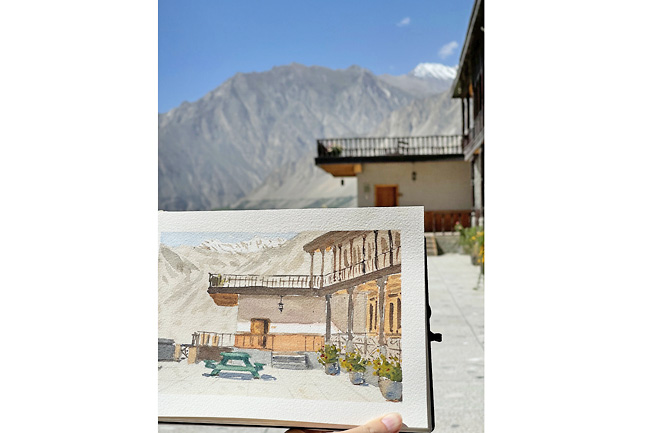 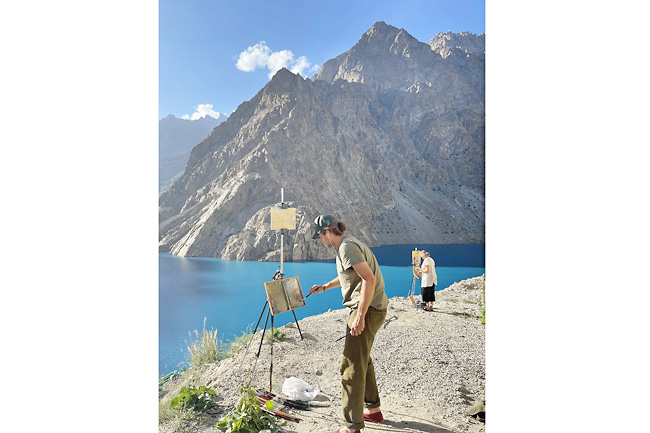 One would think that getting international artists would be a challenge but for Mian and Waliya that was not difficult.

In Mian’s own words, when you love something and you really believe in it, it’s not very difficult to convince people.

“During our Zoom calls with these artists, we shared photographs and stories from the north – that’s all we had to do and people just fell in love,” he added.

What helped greatly with the planning was that Roomy hotels graciously became a partner in the tour and took care of accommodations, food and everything else.

Their yurts in Gulmit were a great experience to stay at and it made things easy for Mian and Ahmad who wanted to make sure the participants had a comfortable stay because when artists paint six to seven hours a day, they want to come back to comfortable accommodation.

The tour extended 10 days and began in Islamabad from where they travelled to Batakundi, Karimabad, Gulmit, Minapin in Nagar and back to Batakandi before Islamabad, where they exhibited at Dastaangoi.

During the tour, they also went to Jaglot, the place where the mountains meet, explored glaciers in Batakundi and went all the way up to the Passu glacier in Gulmit. A usual day on the tour began early in the morning with everyone gathering for breakfast, followed by painting sessions in the morning and at sunset.

Each of these sessions were between three and four hours and all artists worked on multiple paintings a day, so they ended up with over 50 paintings.

Since Mian and Ahmad had already done the same trip and have friends in the region, they also planned excursions and exclusive activities for the artists, like visiting a musician’s house, meeting a local artist and trying out different restaurants and cafés.

What set this tour apart from other art tours and residencies is the fact that Mian and Ahmad were very careful in curating a small group that stayed at the Dastaangoi vineyard initially and got to bond.

“Although the artists came from diverse backgrounds like the United States, Finland, Austria and the United Kingdom, the tour itself was a very personalised experience for each of the artists. This was the first time trained plein air artists were invited to come and paint Pakistani landscapes,” explained Mian.

Sara Knapp, an artist who joined the tour from Florence, told Images that although this was her first experience travelling to Pakistan, after the incredible landscapes that she got to see, the people she met, food she ate, and experiences she lived, it most certainly will not be her last trip.

“From the talks I’ve had with Pakistanis abroad about their home country, before travelling I knew that there was more to Pakistan than the reputation created by the narrow subjects commonly reported on in Western media. Looking past the headlines, I was eager to visit, and especially to see the country through the method I see best with – painting.

“However, it wasn’t until physically being there that I truly understood Pakistan contains whole worlds of histories, cultures, and natural landscapes that stretch the imagination within itself,” she said.

Anyone who would find out about such a tour would wonder what happens to all the artwork afterwards.

Mian told Images that after they were exhibited at Dastaangoi, the prints were up for sale but the artists are also finishing these paintings and adding more details to them back at home because of limited time on the tour.

During the tour, the artists got to see three bridges that were damaged because of the floods and the changes in glaciers due to climate change so they want to give back as well.

Some of the paintings will be auctioned for flood relief.

But that’s not all! Some of these paintings will be used by the artists to create larger works that will be exhibited in Dubai next year.

The idea is to show the world Pakistan but also to show the effects of climate change because it’s very important to showcase different mediums while representing Pakistan.

Reiterating this, Knapp mentioned that the most surprising moments from her visit had to do with seeing the environmental changes caused by a warming climate and their destructive impact.

“The strength and resilience of Pakistanis’ response to adversity is surprising. Receding glaciers and flood damage moved me, but the kindness and warmth of locals welcoming tourists after a tragedy, the quickly cleared and repaired roads, and the ever-present beauty of the landscapes despite their recent changes moved me that much more.”

Another artist who joined the tour, Phoebe Stewart Carter, said that visiting Pakistan completely lived up to her expectations and even surpassed them.

Pakistan has become one of the most interesting and beautiful places she has seen.

“I knew beforehand I would be wowed by the landscape, I had seen video footage and photographs from Dastaangoi and the Internet, but being there in the real is a different feeling altogether. One of my favourite moments was sitting on top of Kho Meadows looking up at Rakaposh,” she said.

Carter was most surprised by the amount of kind people, not because she expected less from Pakistani people, but in the majority of the European Union, ‘the tourist’ is not the most popular character.

“Between the cascading mountains, beautiful and unfortunately fleeting glaciers, lovely people and good food, I am excited to make a return trip very soon,” she added.

And with Dastaangoi always planning something new and interesting for Pakistan’s art landscape, we can be certain artists like Carter and Knapp will have multiple chances to visit the country while our local artists put Pakistani art and culture on the global map.